Our next major stop was at Carnarvon where we stayed at the Coral Coast Tourist Park for almost 3 weeks as Frank had some fishing planned at the world famous rock ledges of Quobba and Steep Point. 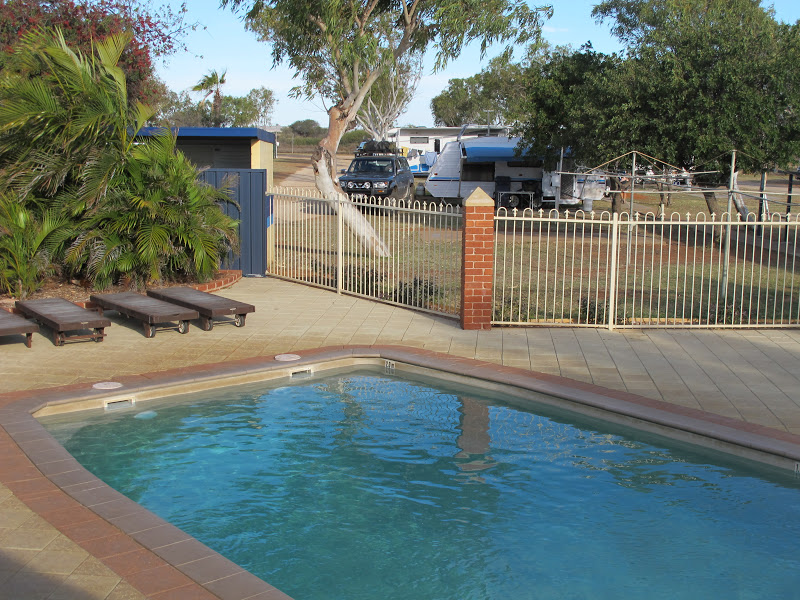 The Blowholes on the Quobba Coast.

We explored the town and it’s iconic 1mile long jetty and had dinner on the picturesque Fascine. 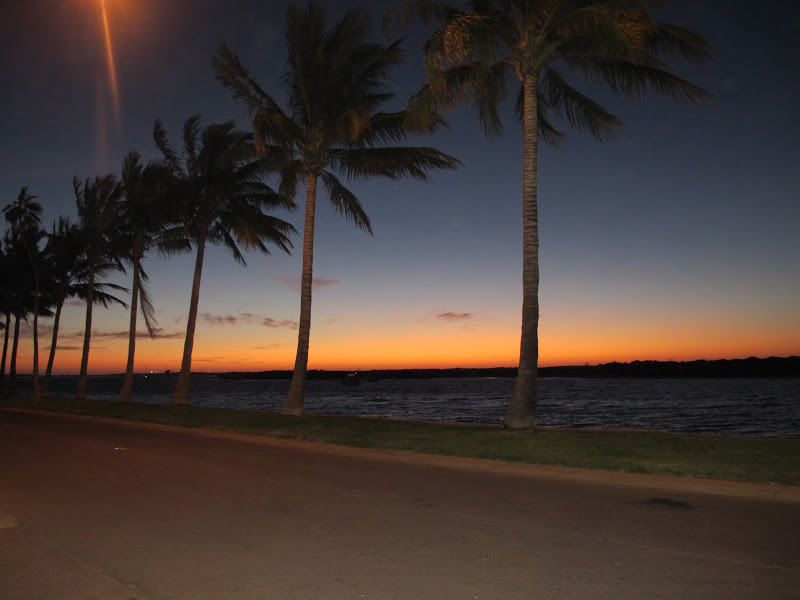 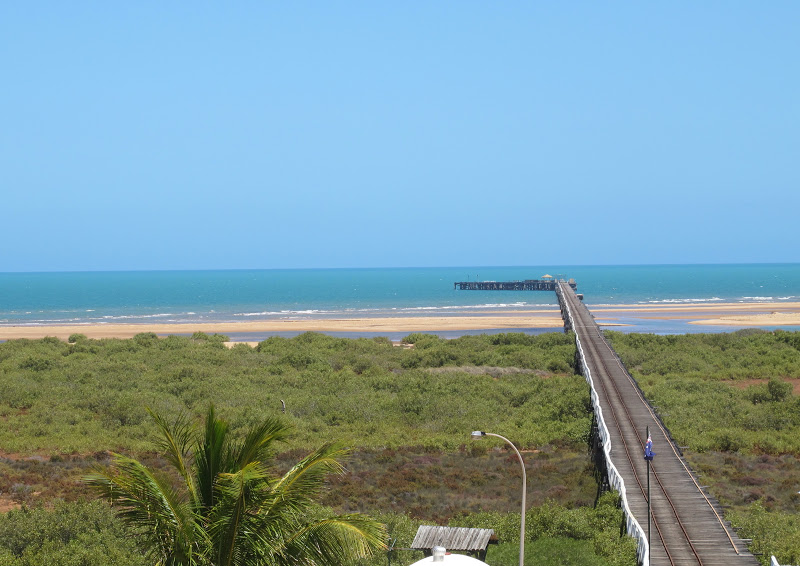 Towering on top of a hill is the dish and space communications museum which was part of the 1969 Apollo moon landing. 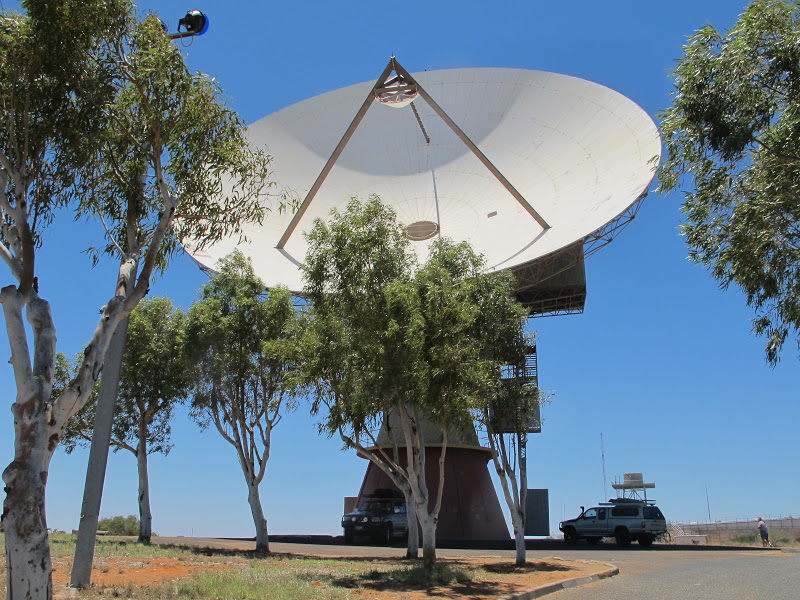 From Carnarvon we went on to world heritage listed Shark Bay where we stayed at the scenic seaside town of Denham. 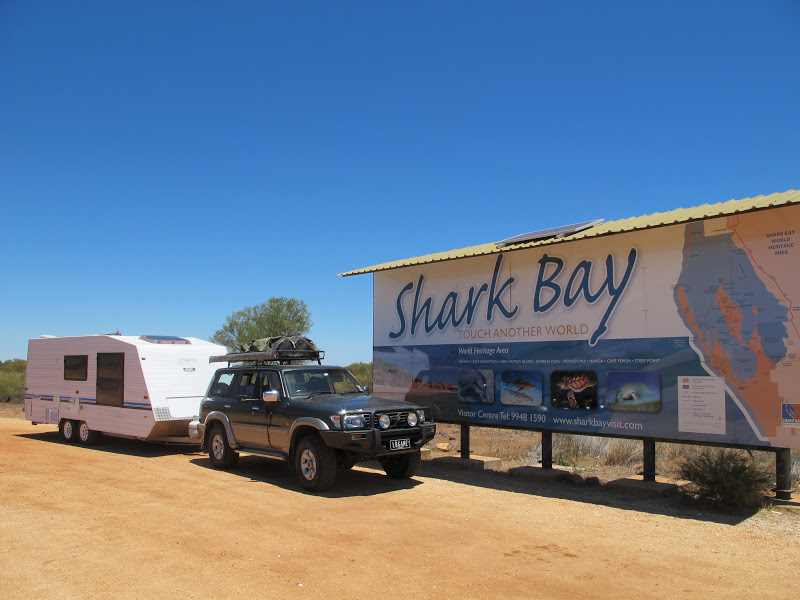 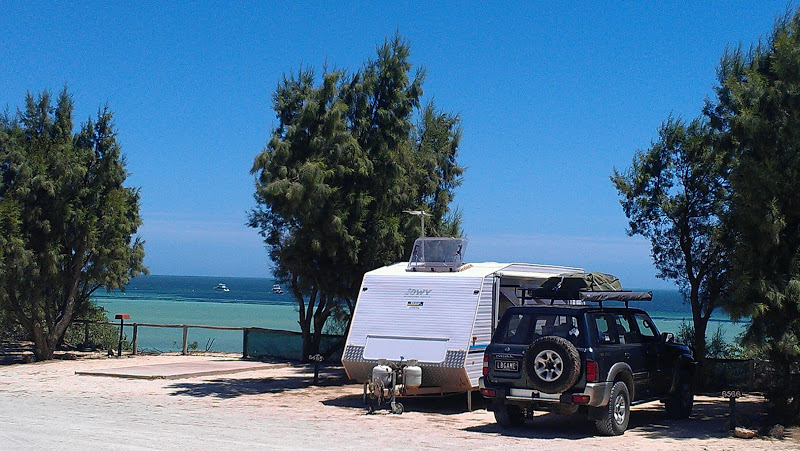 Shark Bay is famous for the wild Dolphins at Monkey Mia that come up to the beach every day for a feed of fish. 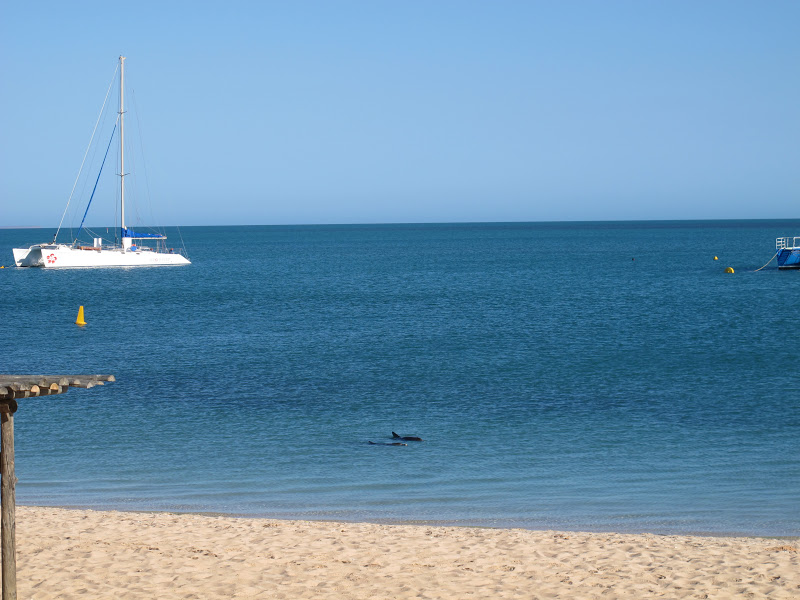 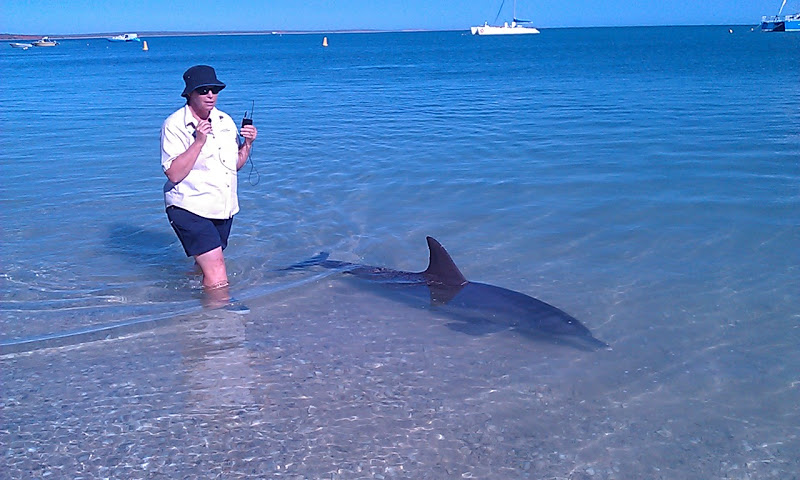 Also during the feeding a friendly Emu snuck up behind the crowd to check things out. 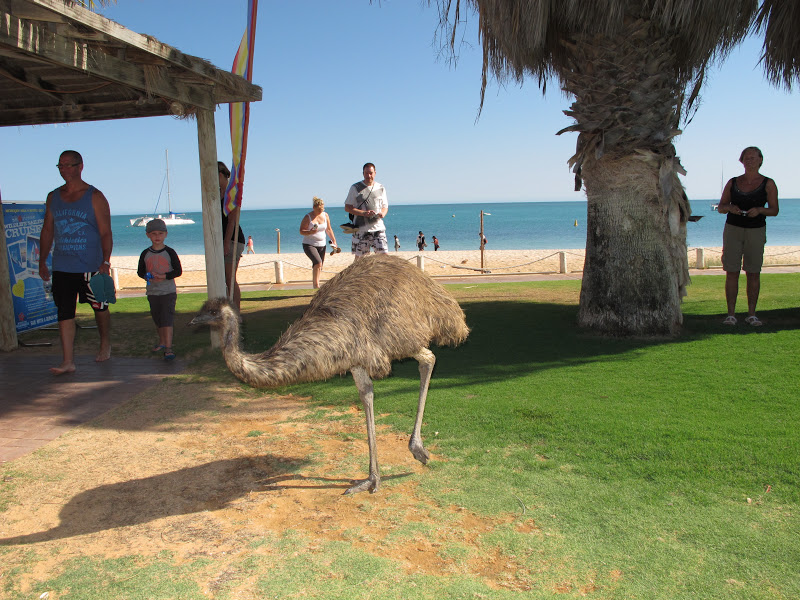 Shark Bay is a diverse eco system with high saline bays with unique marine life. The Stromatolites are viewable from a boardwalk. 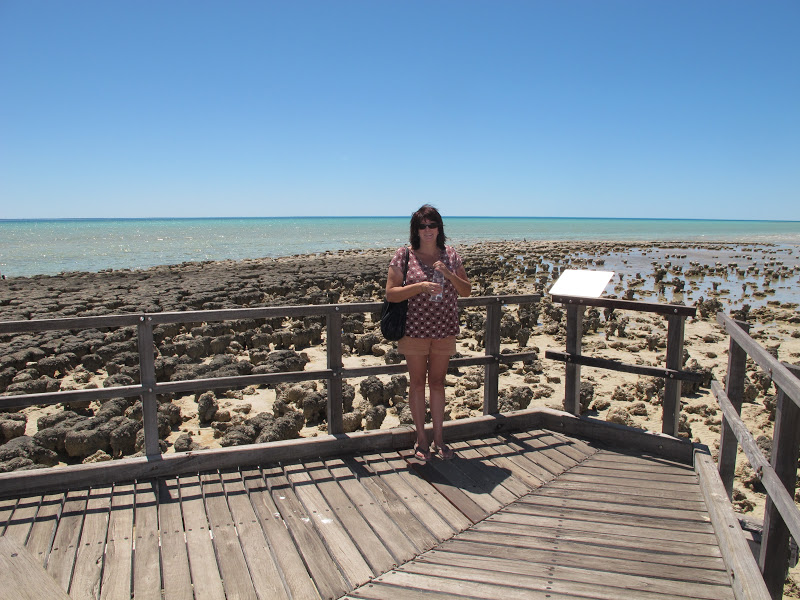 There were numorous historic buildings in Shark Bay constructed from blocks of compacted shells which are glued together from a secretion of the shell and rainwater. The quarry and shell beach are quite unique. 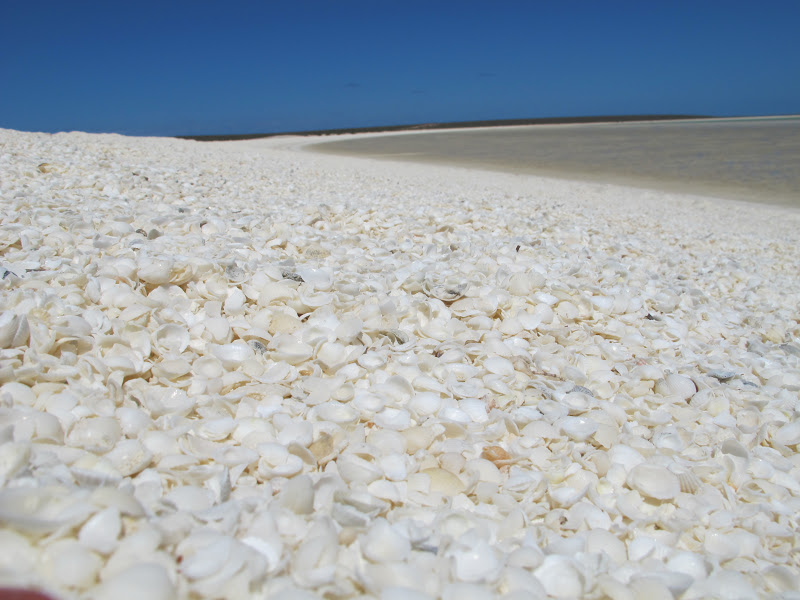 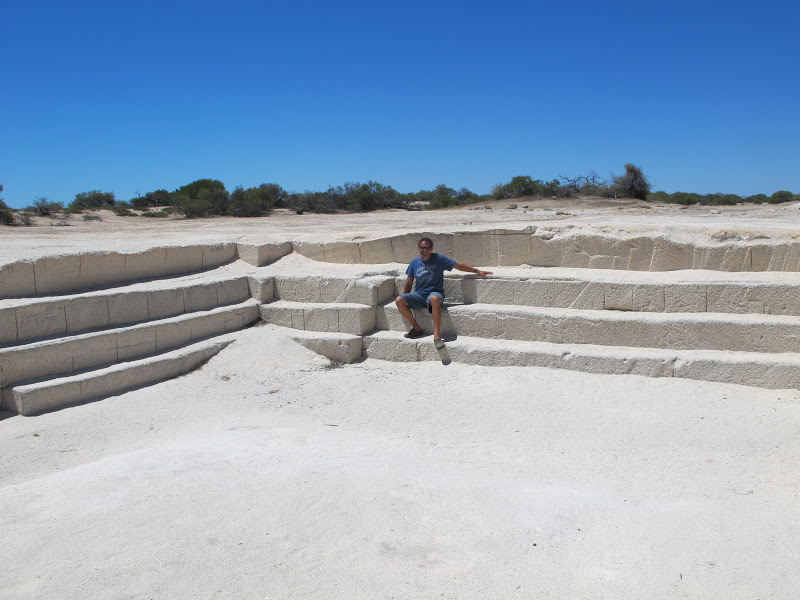 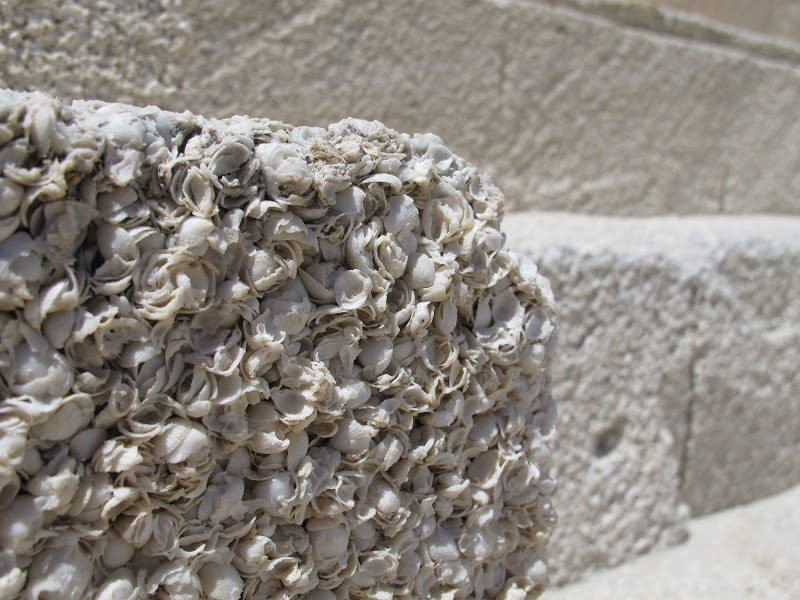 Our next stop was at Kalbarri where cliffs towered to the south and windswept beaches and sand dunes extended north. The Murchinson River cut through the middle, forming beautiful gorges. 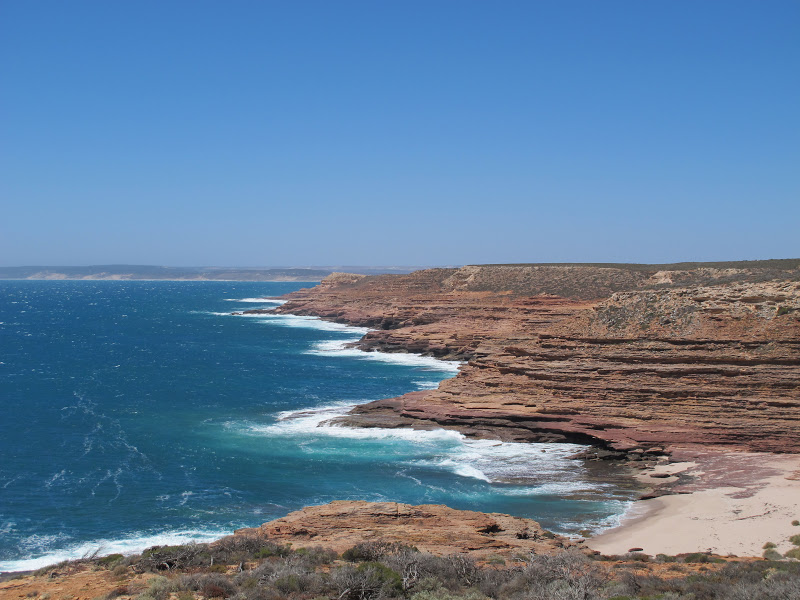 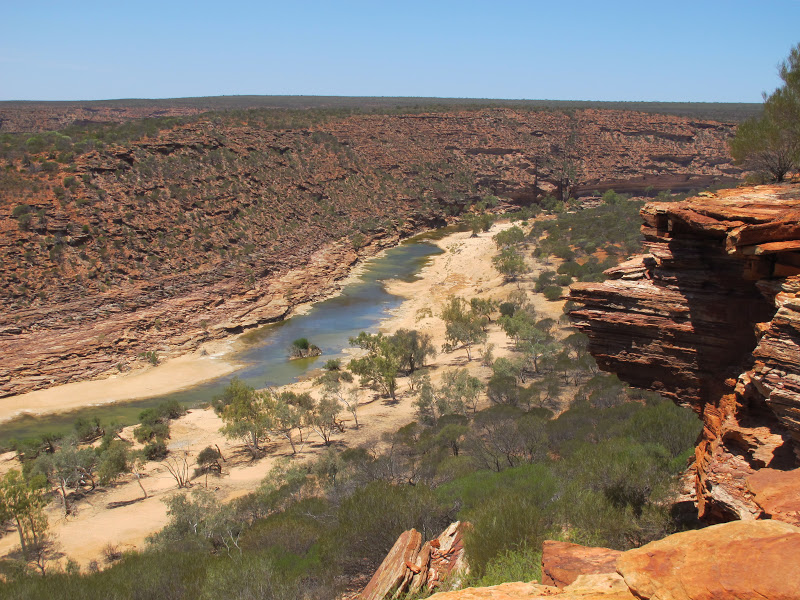 “Natures window” was up on the ridge, formed by erosion over many years. 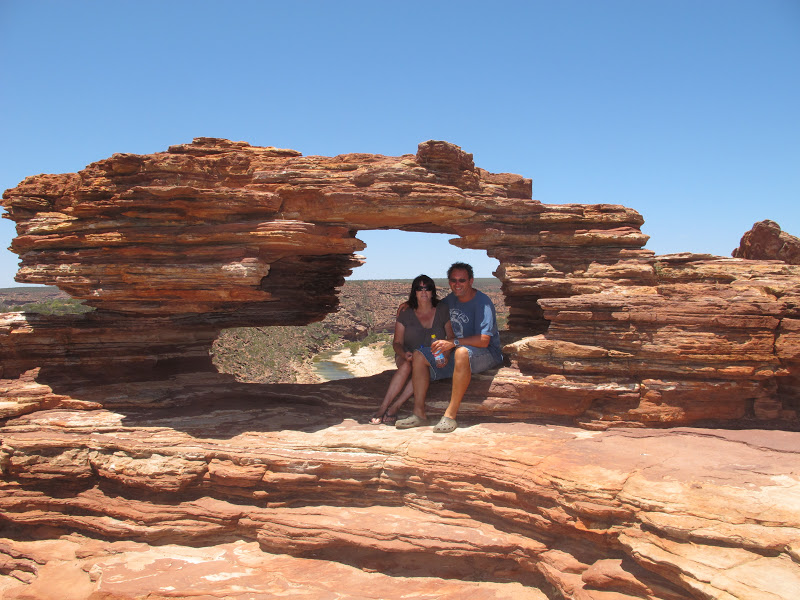 Although wildflower season is coming to an end, there are still some stunners along the road in November. 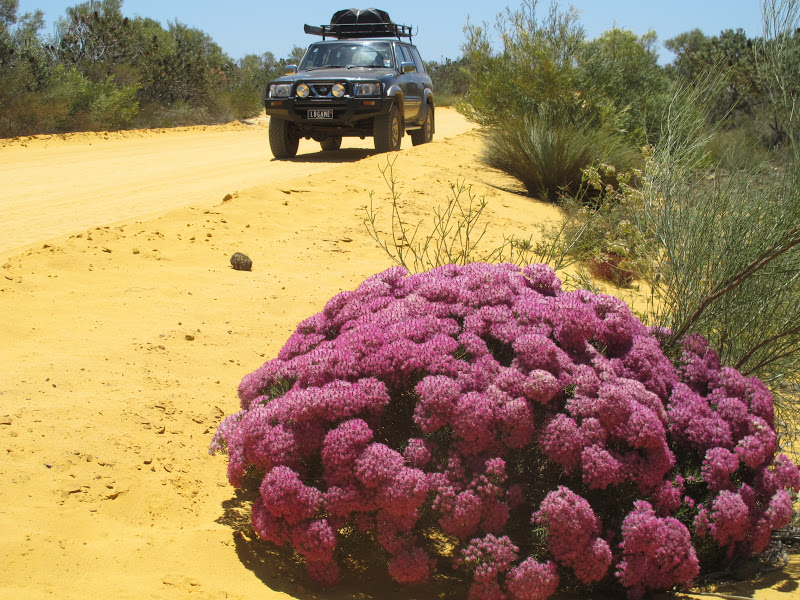 Next day we went Canoeing in the Murchinson River which was a first for us. Bonnie, the station dog came along too as there was bacon and egg breakfast at the halfway mark. She showed us where the shallow sandbars were. 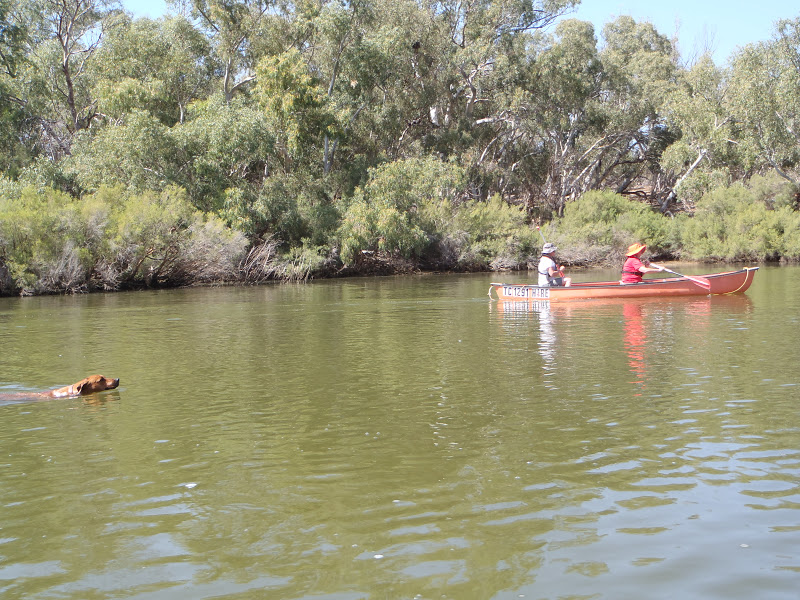 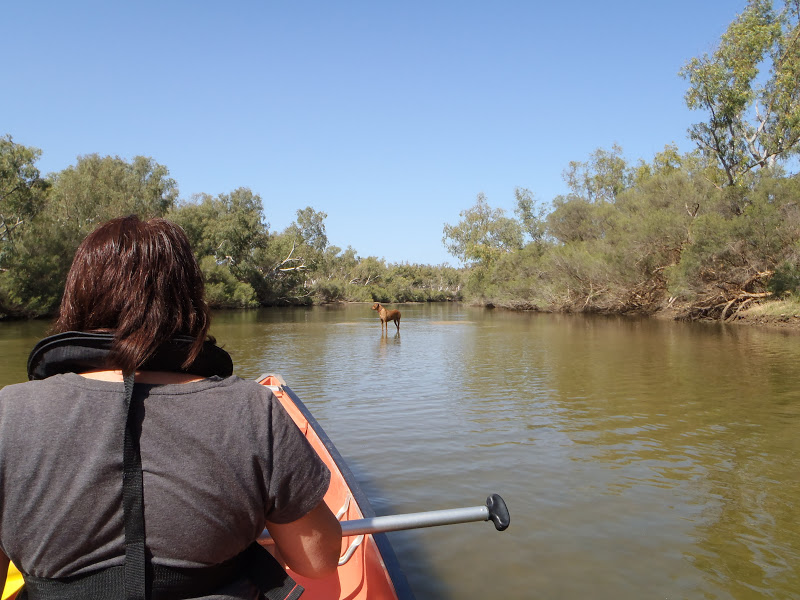 After breakfast, our guide Alex thought it was a good idea to try and see if we could stand up in the canoe. Frank stood up for a few seconds but as i had a childhood fear of having my head under water since my brother sat on my head, so i stayed put. For some reason, a few minutes later i decided to give it a go and stood up. Just as i was about to shout out to Alex “look at me” i lost balance and fell backwards and sideways over the canoe and the next thing was underwater. Panic set in and i thought i was drowning. Frank managed to lift the canoe i was stuck under. Once i started to settled down i managed to lift a finger for the photo as the guys thought it was quite funny. 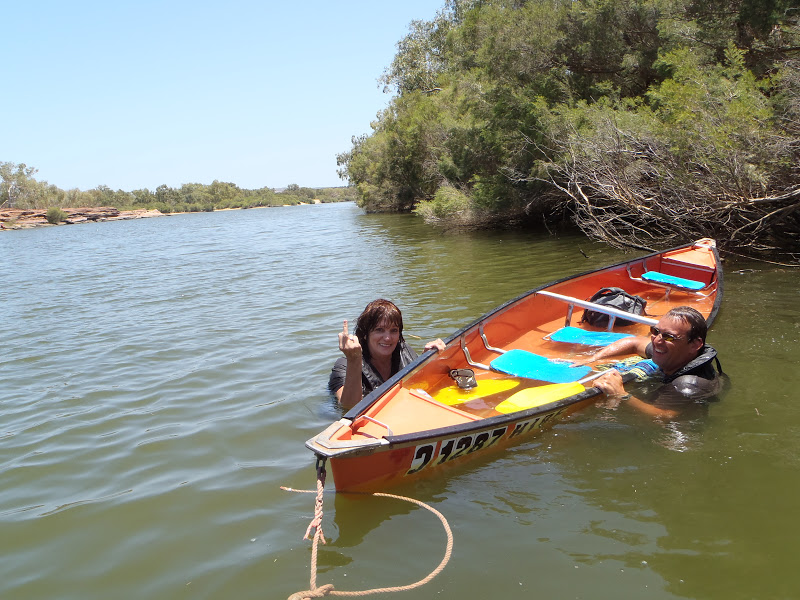 From Kalbarri we travelled south to Jurien Bay and free camped somewhere along a beach. 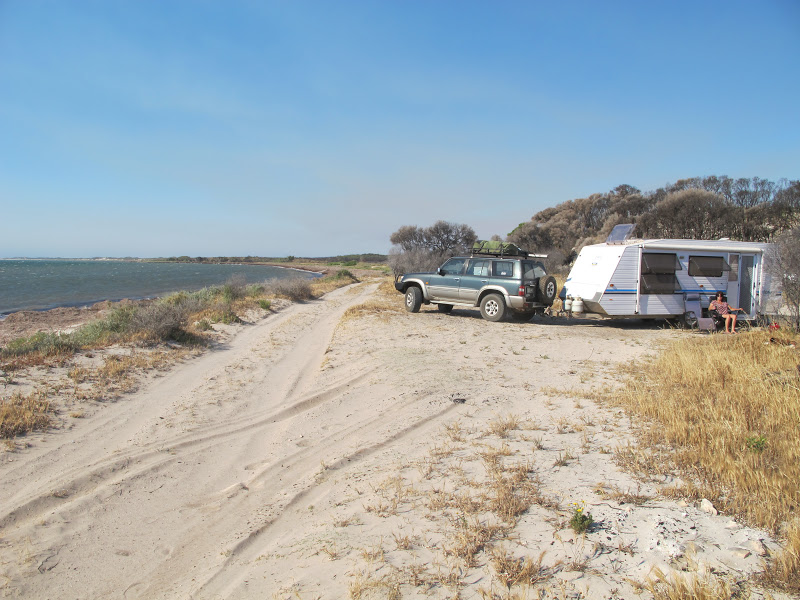 Sticking to the adventure theme, Frank went to see if he could have his own near death experience and went skydiving from 14000 feet with a 60 second freefall. 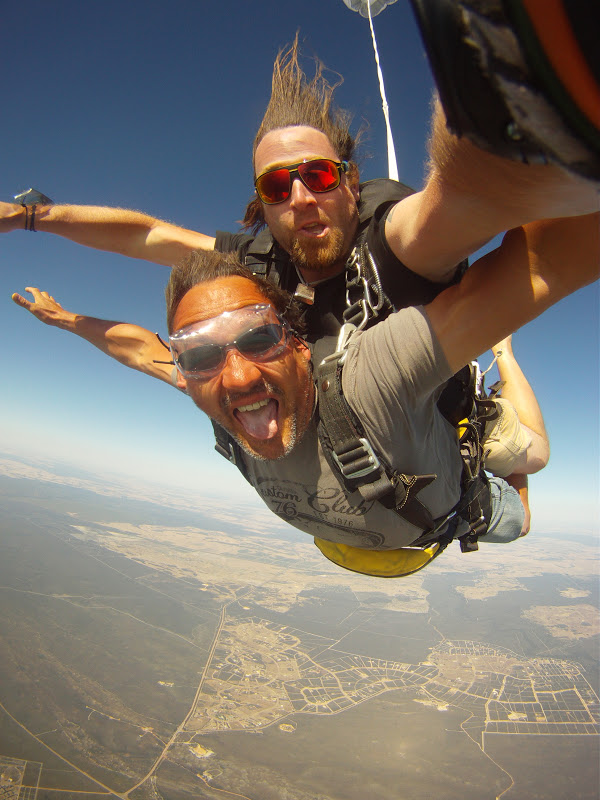 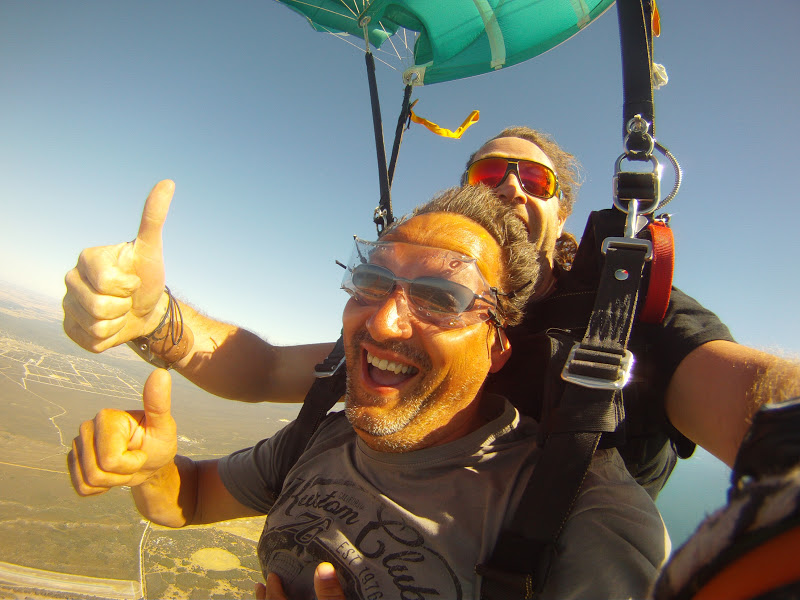 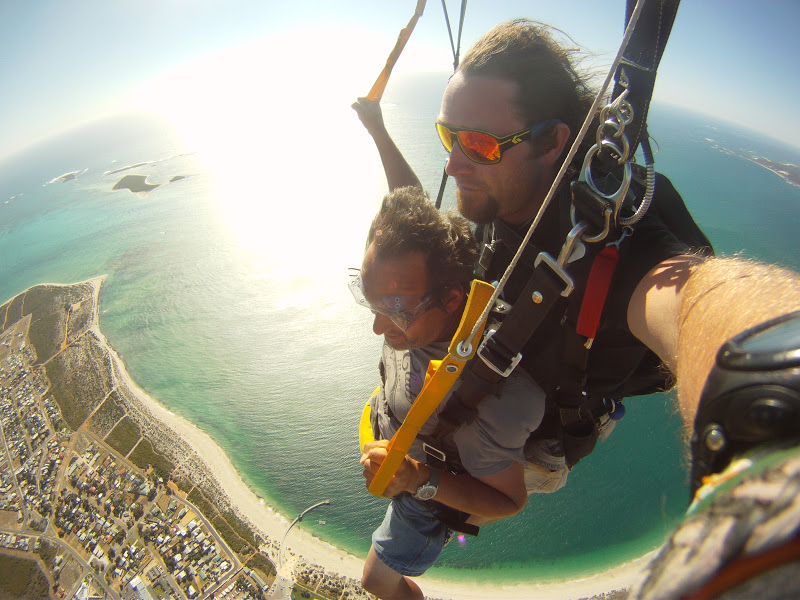 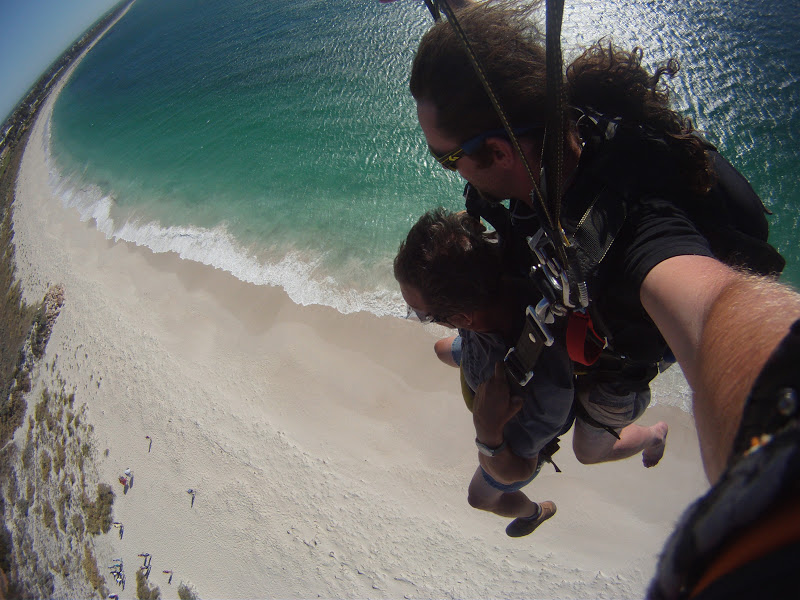 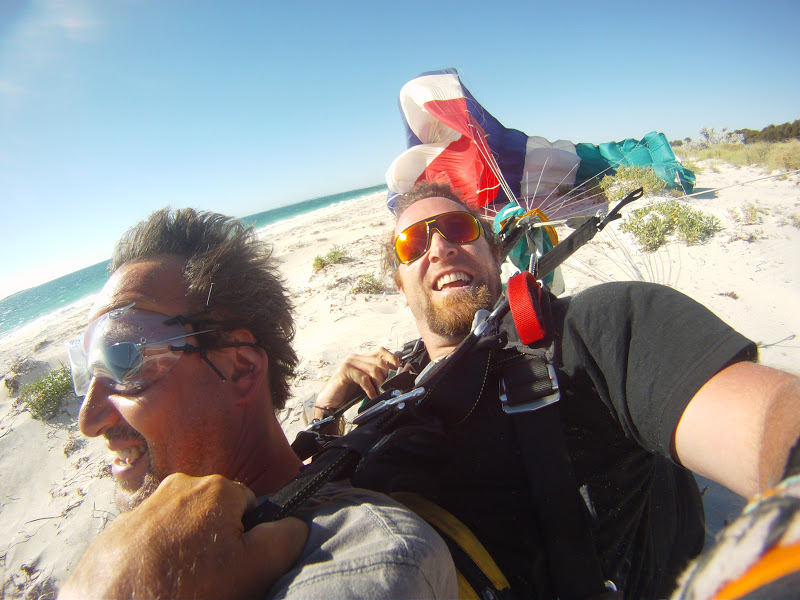