Since writing the Marlin blog I have been busy making fishing gear and promoting Busted Fishing so there was not much time to fish. Needless to say by the time October was in sight I was itching to get back out there chasing Snapper. This season I also had a welcome addition in the form of a jet cooker and my first cookup was Spaghetti Bolognaise which went down a treat. I regret not getting onto them sooner as it doesn’t add much weight to the backpack at all. 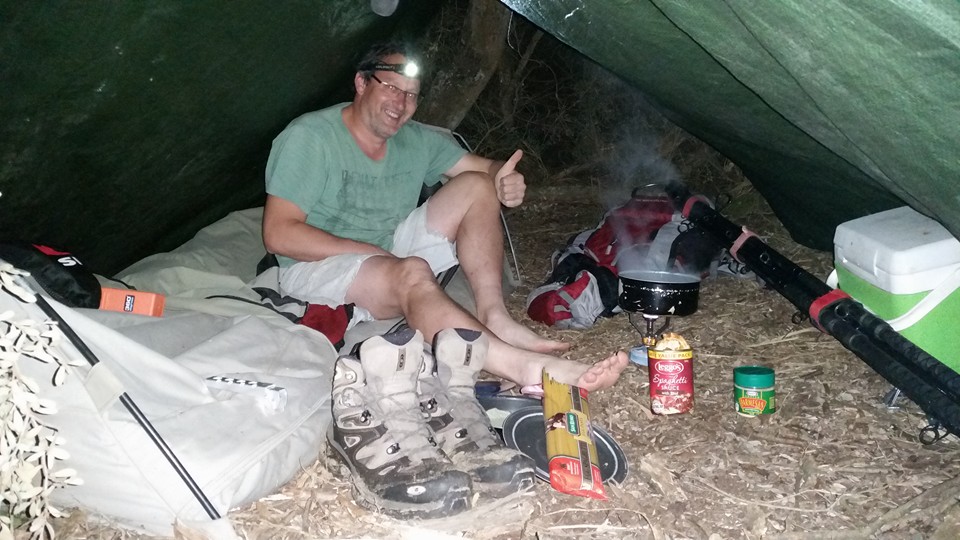 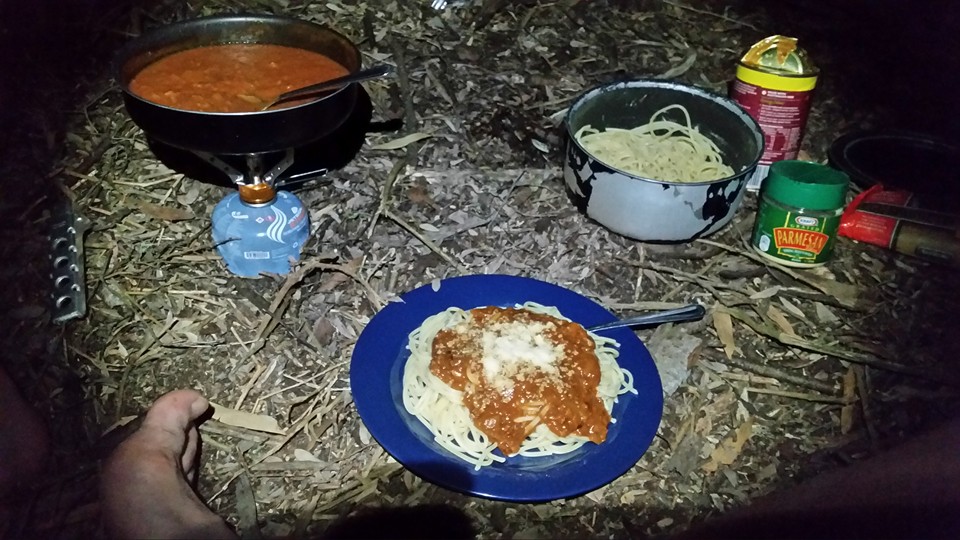 After the first 2 trips without a fish, I managed the first Snapper at the end of September 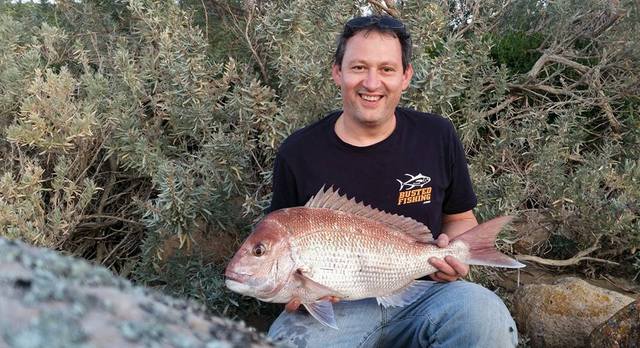 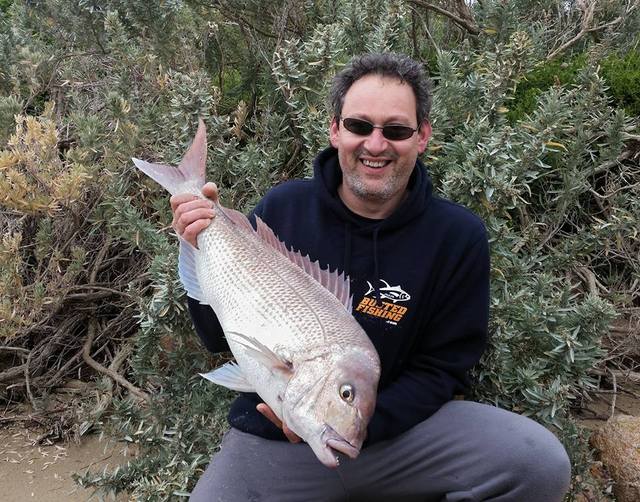 Start of October I had another great weekend with the first Snapper of the rocks, and then the plan was to catch some fresh Squid afterwards and fish of a pier. The morning session produced one small Snapper. 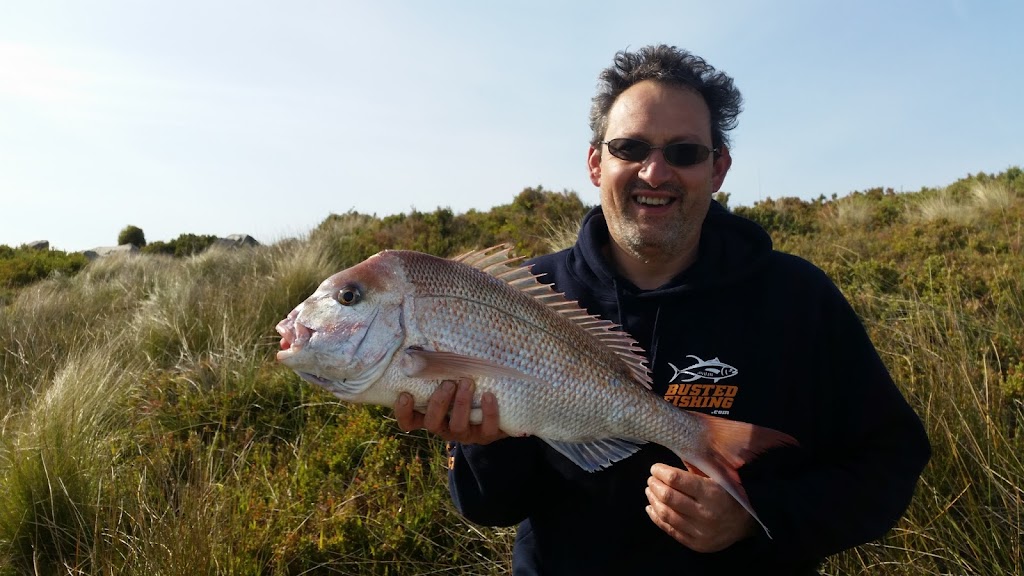 The new addition to my tackle for 2015 was a new Avet MXJ Mag Cast reel which I planned to put through its paces. Although not the perfect outfit for casting Whiting under a float for Squid I wanted to see how the mag cast would handle it. I was very surprised with its performance and managed two good Squid from the beach 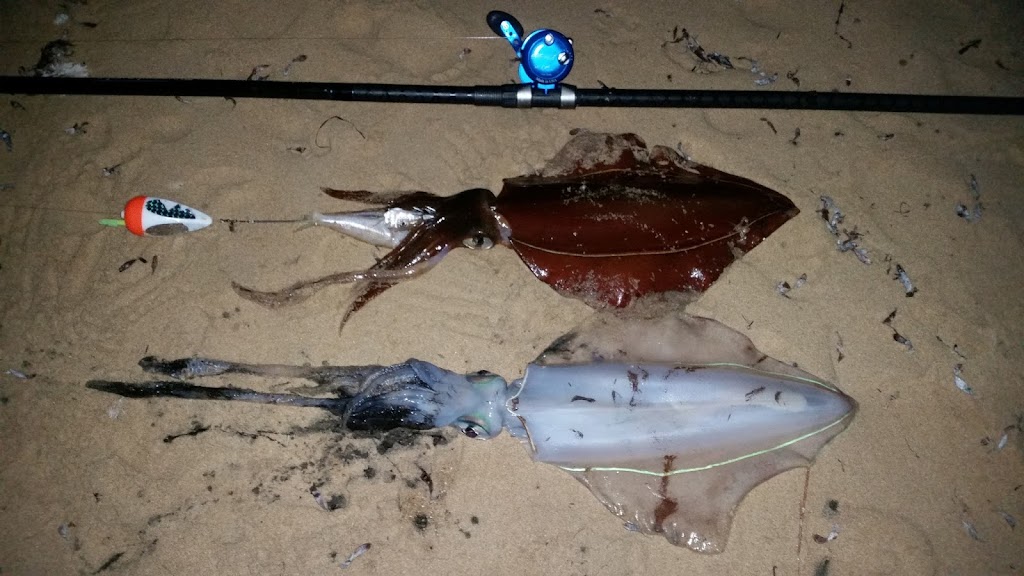 Armed with the two Squid, the Avet MXJ and the Anyfish Anywhere Six & Bait I headed to a jetty for a night session. And what a session it turned out to be with 2 great Snapper landed on Squid strips and the Duck’s Nuts running rigs. The Avet cast like a dream with zero overruns 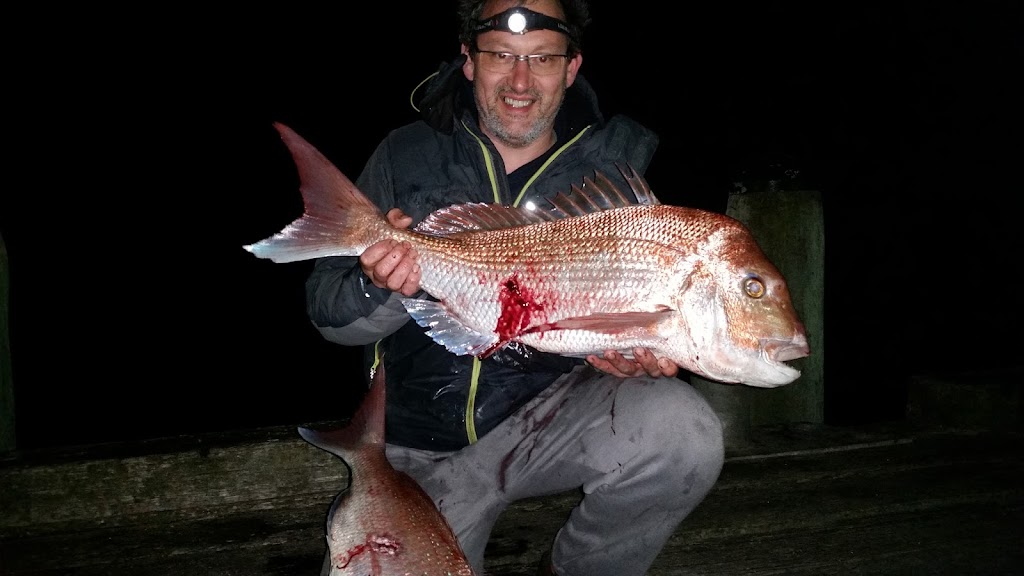 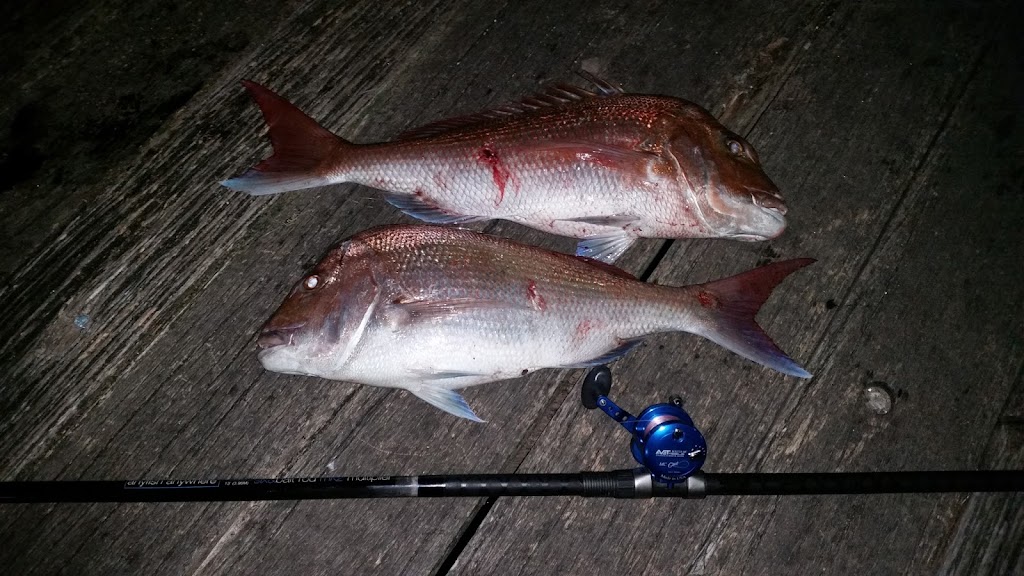 Having had a rest the following day having already bagged out I headed back to the rocks for another night session and pulled up another nice Snapper rounding up a great trip. 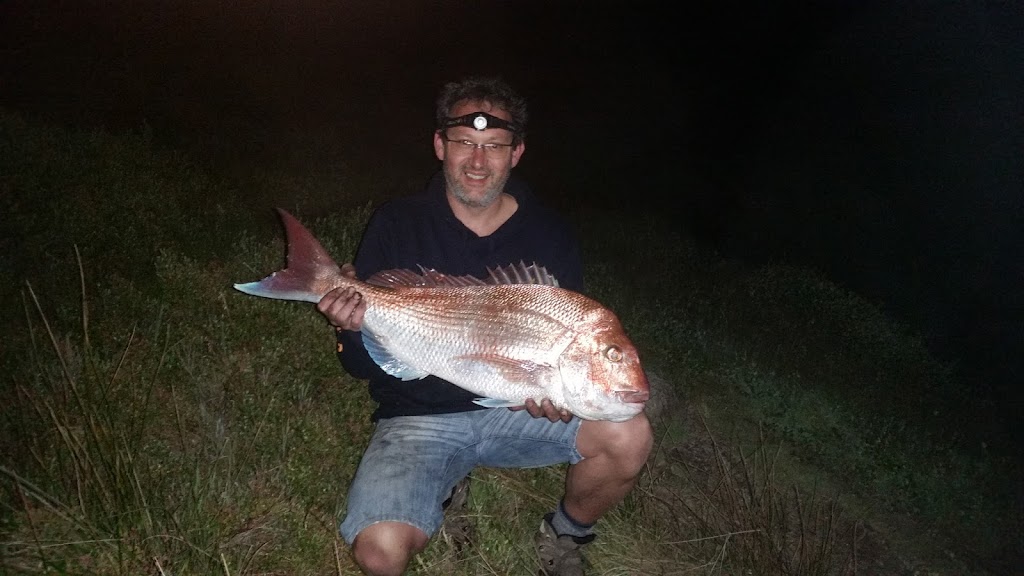 The rod I have been using this year is a Anyfish Anywhere Six & Bait multiplier and the typical weights I would cast were 4oz to 7oz grip sinkers, depending on conditions. The rigs were all Pulley Rigs and Duck’s Nuts running rigs with either Pilchards or Squid strips.
The rod as always performed flawlessly in belting out the heavier weights and knocked over the large rays and skates with ease. Occasional Eagle Rays always provide some great fun too like this fella leaping out of the water on two occasions. 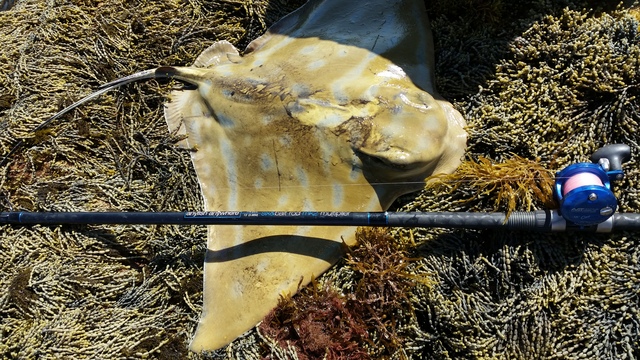 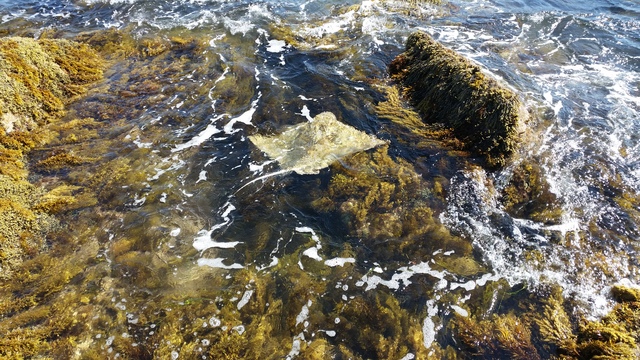 During the past couple of seasons, I noticed Pilchards outfished the Squid baits during the day and vice versa during the night so I was keen to get a few more Squid on the next trip. And what a crazy session it turned out to be as I bagged out on Squid to 42cm hoods in 2 hours. The rig I used was just a standard Whiting on a prong with a sliding glitter bug float set to about 1m depth. 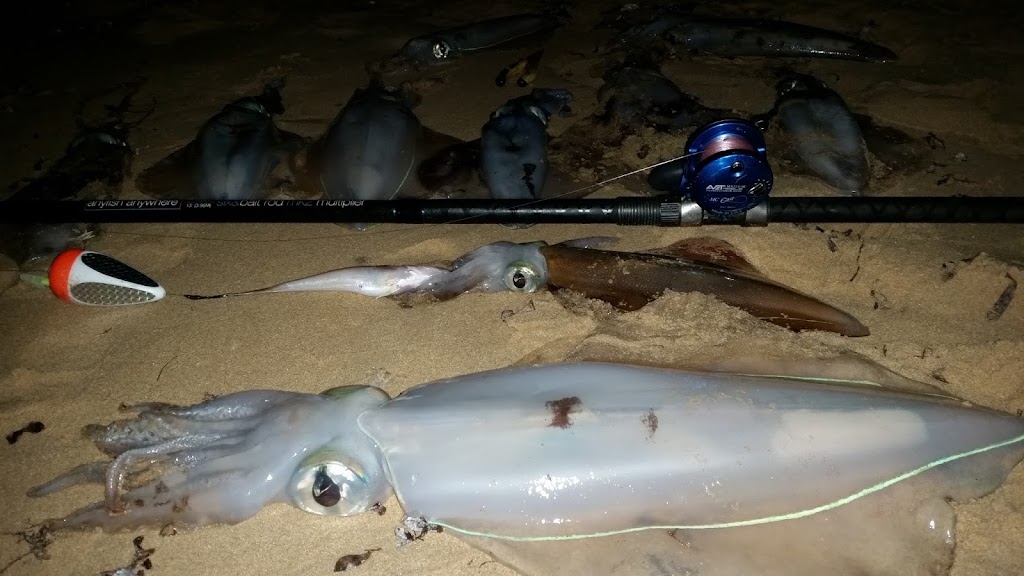 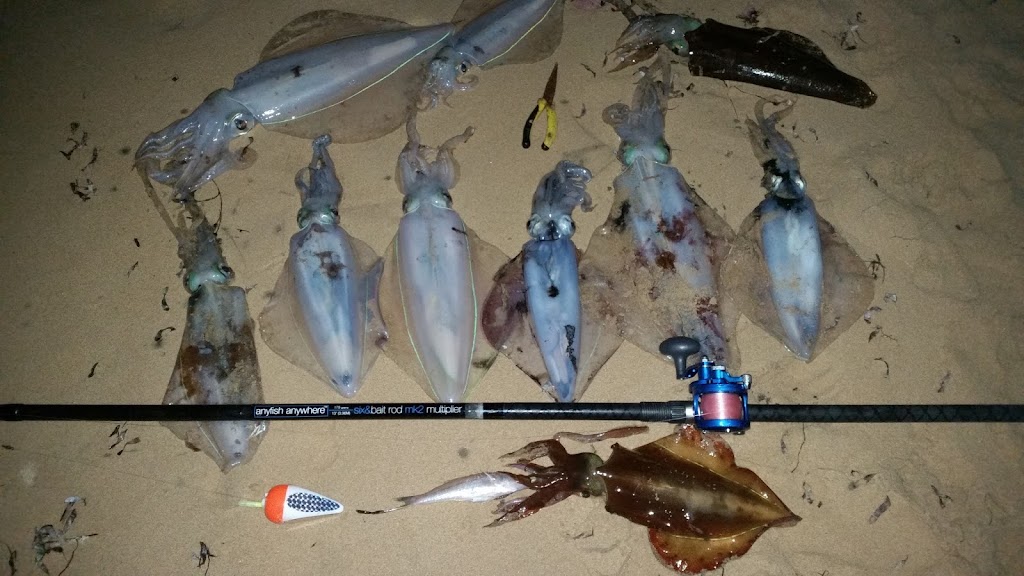 Having plenty of bait I caught up with a couple of mates on the pier and we got our favourite spot and started to punch squid strips out, hoping for a Snapper. My rod was the first to go off and straight away it felt like a good fish. My mate netted a nice Snapper of 7.5kg and just as he did his rod went off and he ended up with a 4kg model as well. Over the next couple of hours, our other mates also caught a Snapper of 5 and 6kg each which was their pb so all round it was a great night. 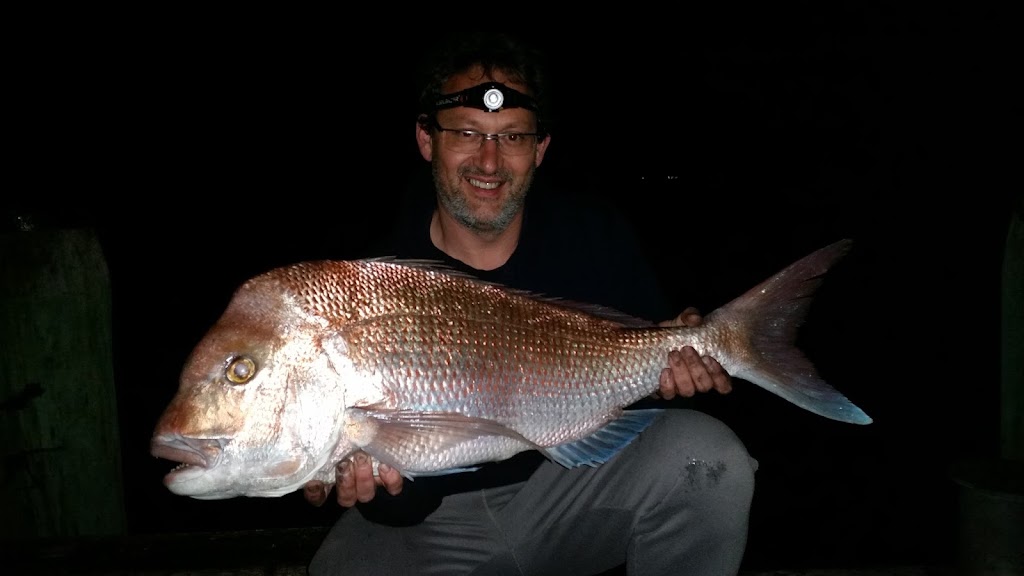 There was a storm warning for the first weekend of November but I was so pumped all week to get out and chase Snapper I decided to go anyway. And I’m glad I did as it turned out to be the best 2 days. Friday night I got a nice Snapper but struggled to take a good photo with the phone and wet hands. Soggy fingers and touch screens don’t mix but eventually, I got one with my head cut off. 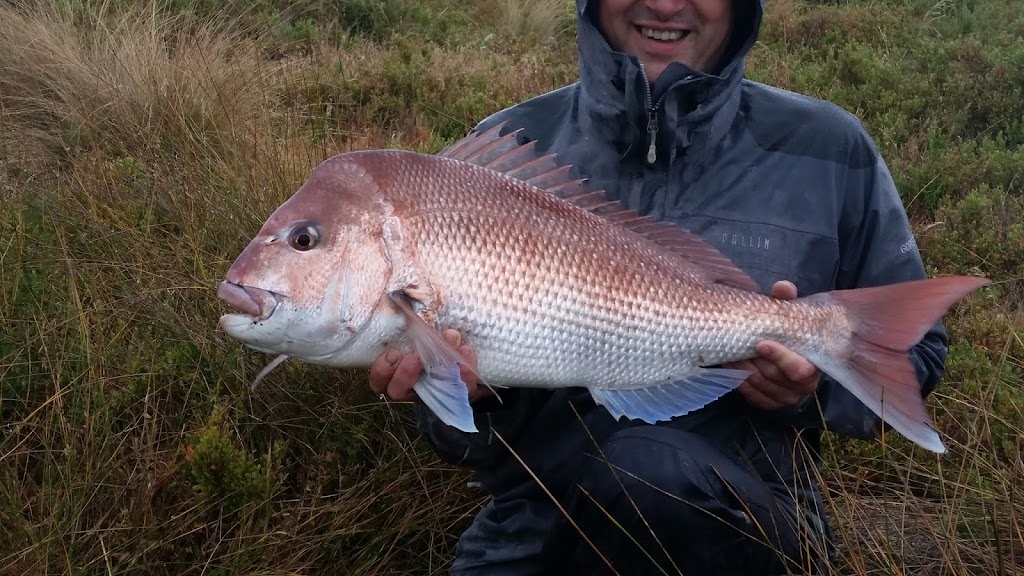 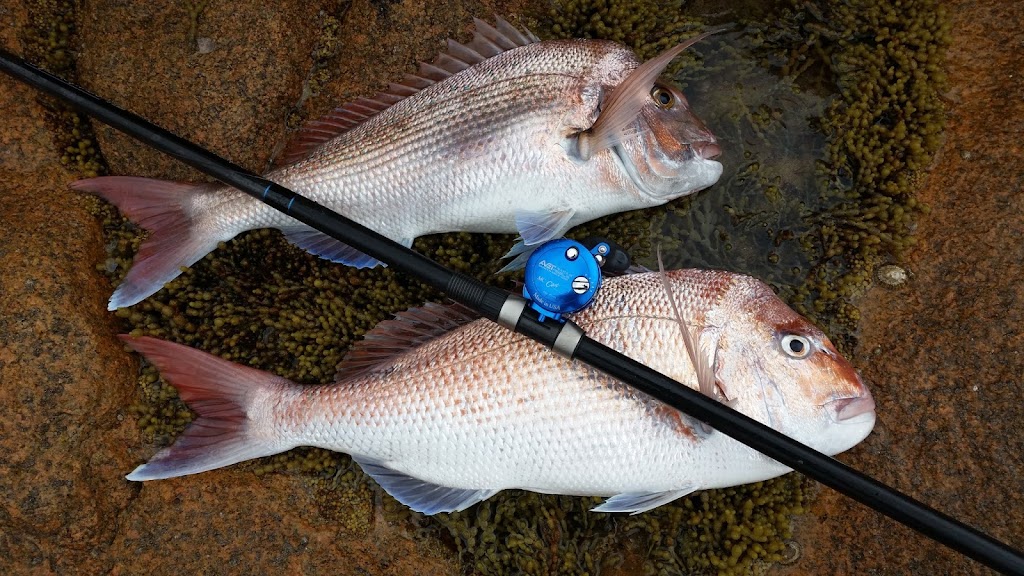 The hike back to the car took an hour and I put the 2 fish on ice, changed into some dry clothes and had a nap. Batteries recharged, the weather looking better I was keen to get back out there and have a fish at sunset. 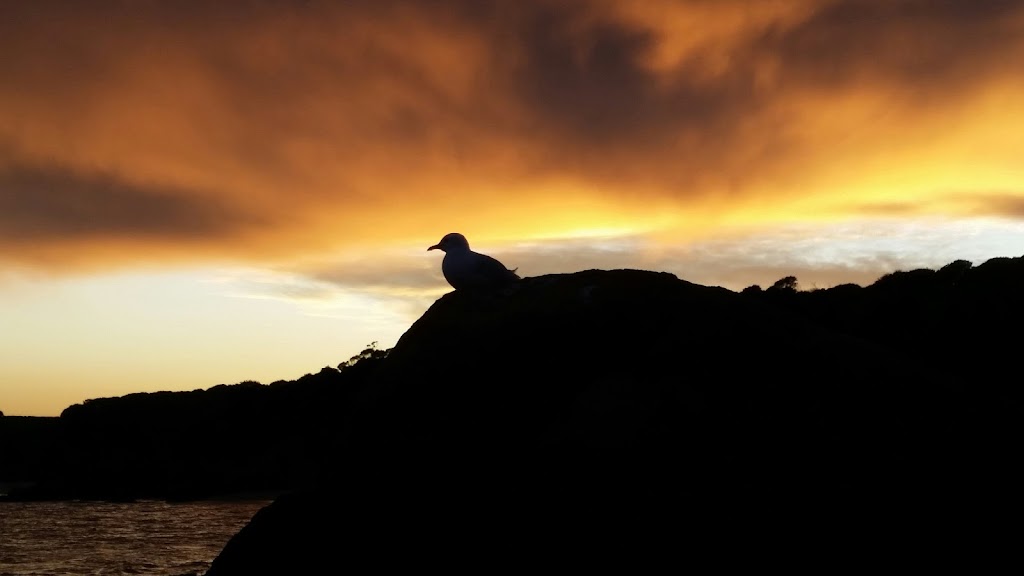 With Snapper number 3 I had reached my bag limit and I was stoked. I dug the Snapper into a deep hole in the sand to keep it in good condition and called it a night. 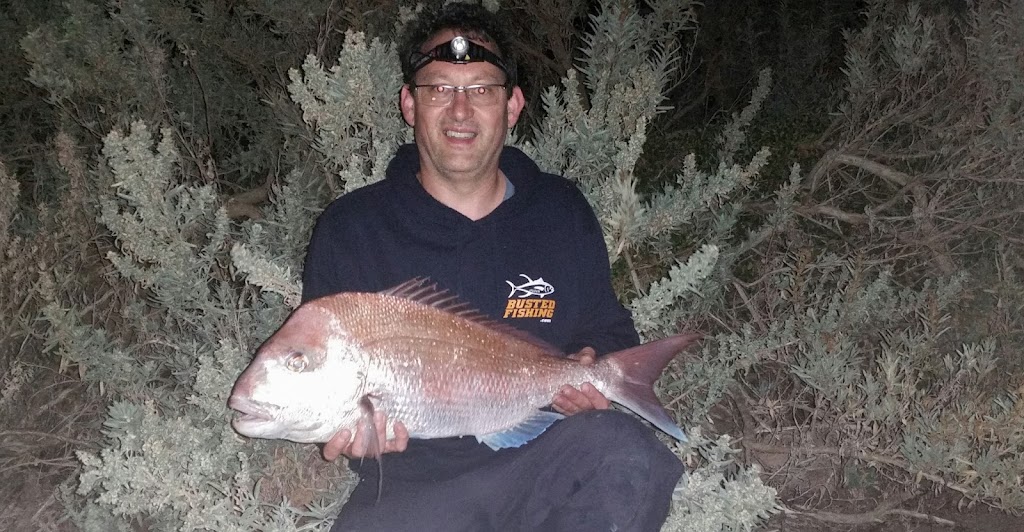 The next morning started off awesome with another 2 nice Snapper and another one released as I had enough to carry back anyway. 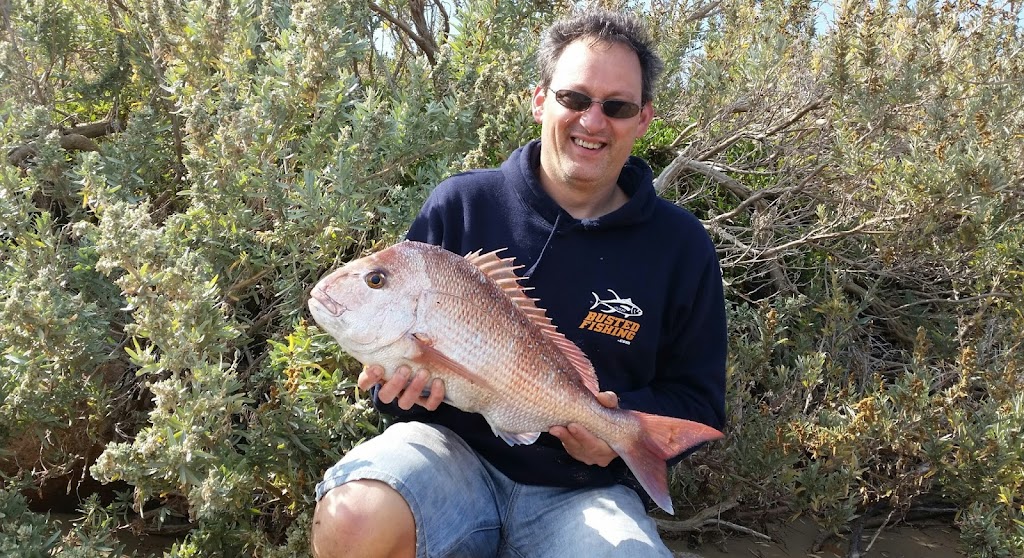 The hike back out took me over 2 hours and I struggled with all the gear and 3 fish in the bucket but it was one of the best Snapper trips I had with 5 keepers and 2 released. 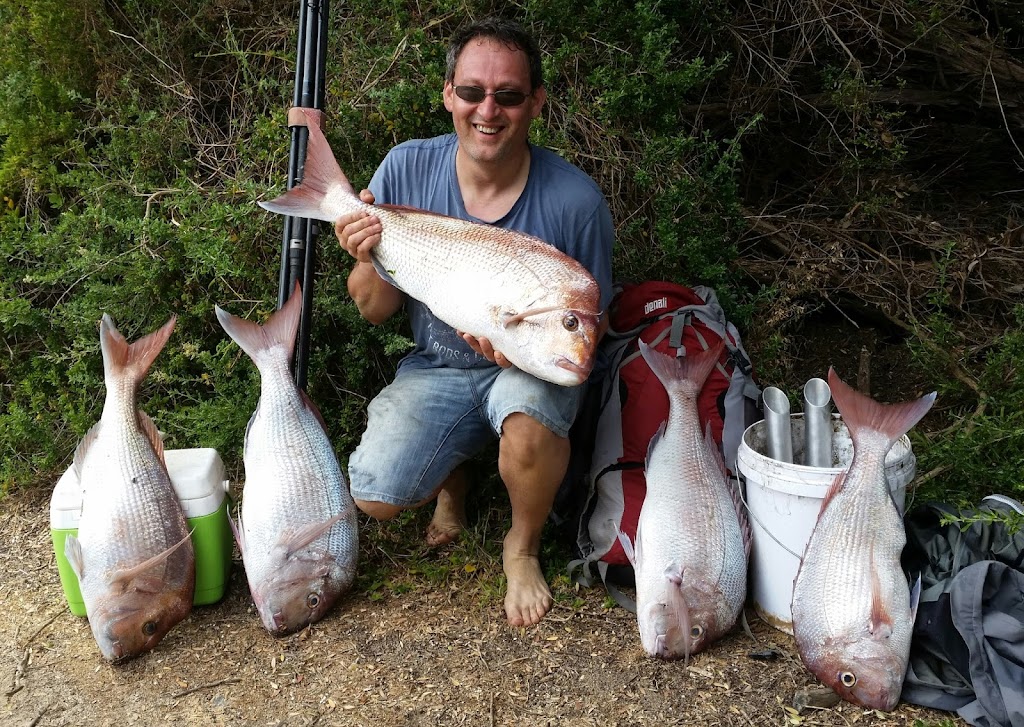 By mid-November, work commitments were piling up and there was one last chance to get out for a land-based Snapper trip. I left work early to be on the rocks before the change of tide and luck would have it, not even an hour into the trip I pulled up a nice Snapper. 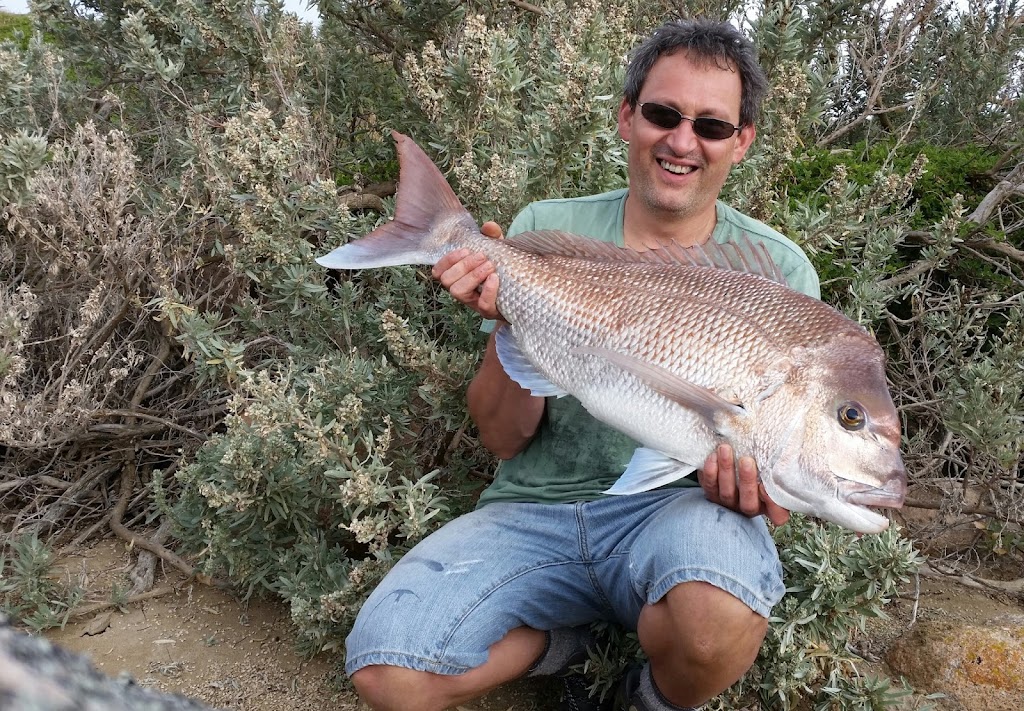 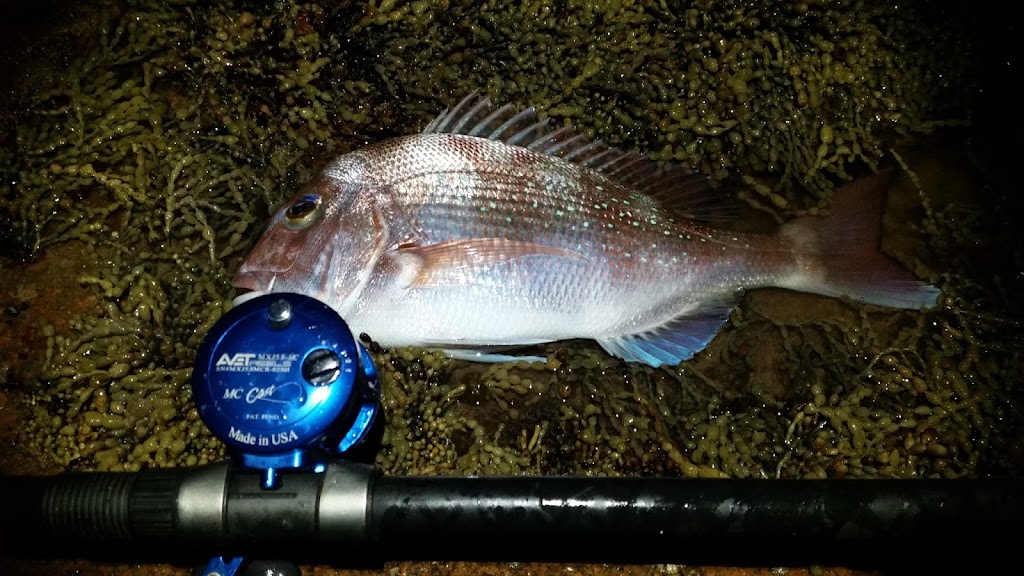 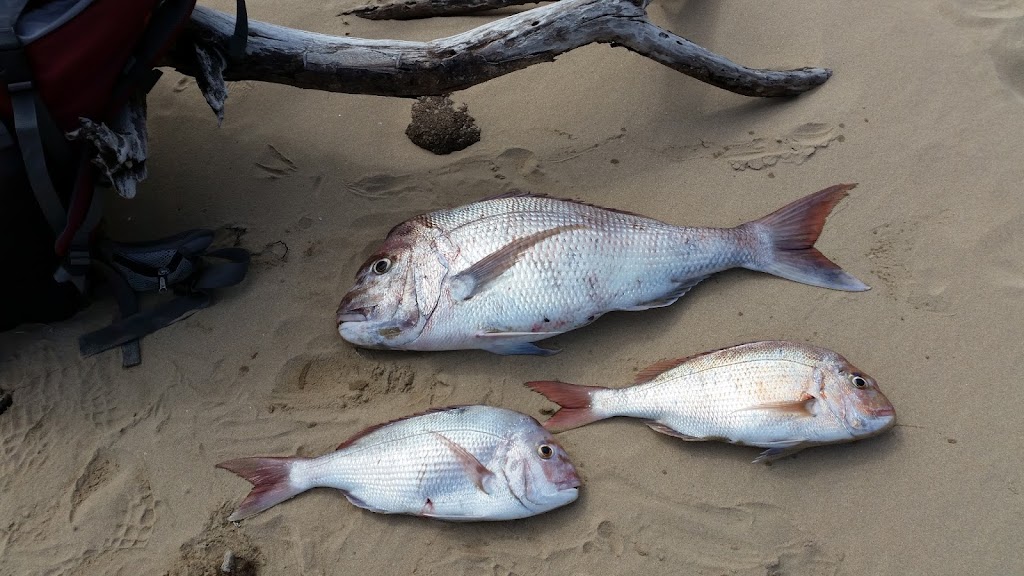 On the way back to camp I came across a few Penguins which were a great sight and it’s the little surprises like this, that always make up for a great experience

Land-based fishing can be very disappointing but also very rewarding, no matter what the outcome. Just being out there in the elements can provide a great sense of freedom and I’m already looking forward to next season and planning other land-based adventures.