For any Melbourne land-based Snapper fisho, spring spells excitement as the red army moves into the bays every year. My 2013 Snapper season started a few months before in winter, with the gathering of Calamari for strip baits. October and November are usually my favourite months and the first trip was preceded by another squid trip from the beach. 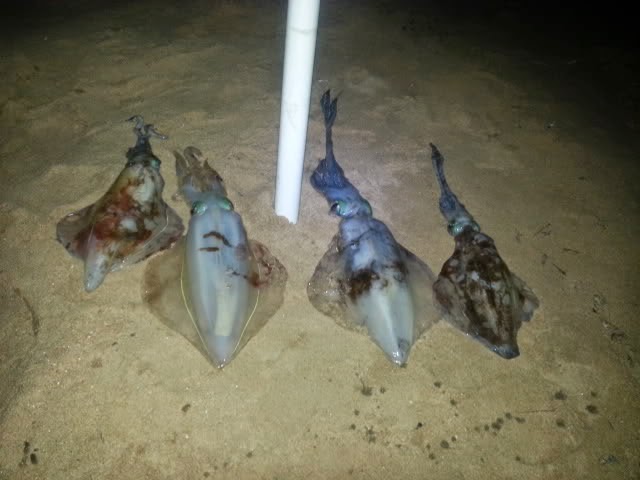 Then Friday after work I drove to my spot and slept in the car until 3 am and then made the long walk to the rocks as I wanted to fish first light. While it was still dark I caught a couple of those annoying Droughtboard Sharks and Skates and when the sun had come up my rod buckled over with some telltale signs of a Snapper and while I brought it in, the headshakes were confirmed by some red colour popping up. Being solo I gaffed it and pulled the 4.8kg Snapper out of the water with a few shouts to myself. 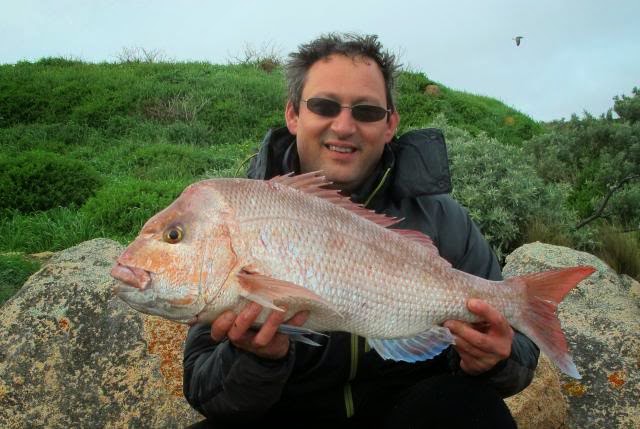 Then I made my way back to the car over some rough terrain and I noticed I’m not getting any younger. 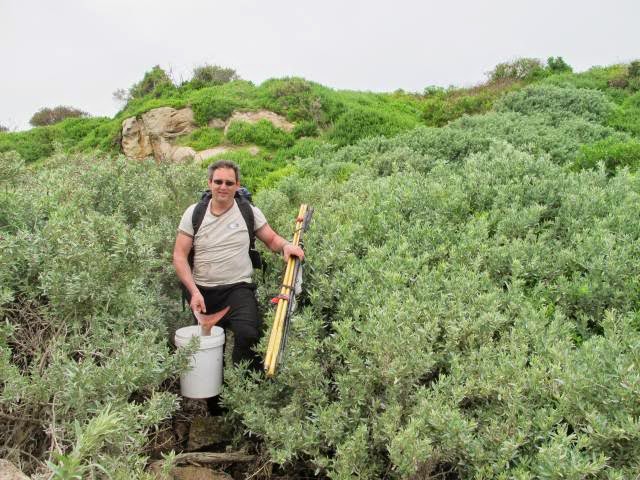 Driving to another spot, I caught up with my mate Brad Palmer and we planned to fish the incoming tide on a pier for another Snapper.
I fished for Squid for a while and to my horror, a massive squid had gone around the pier pylon and somehow got stuck. All I got back was this massive tentacle. 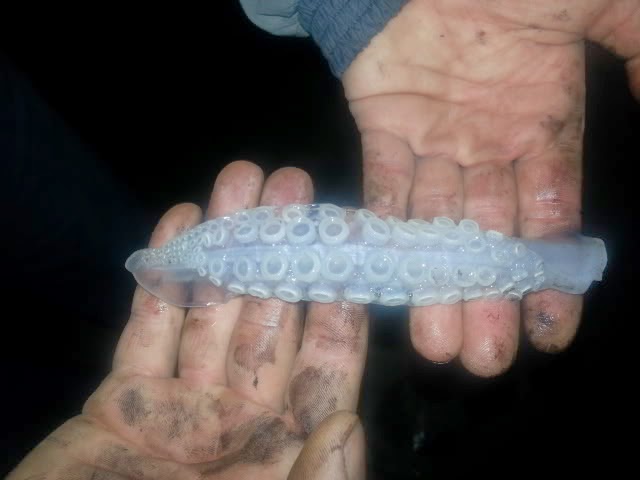 Later that night my rod went off first and another nice Snapper of 4.3kg hit the planks. 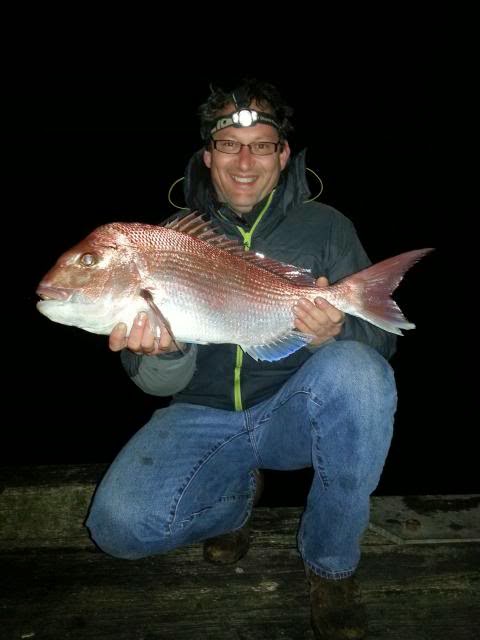 Just when I thought the day couldn’t get any better, Brad’s rod went off and there were some massive headshakes. The fish gave him a great battle and when it popped up we thought it might be a 20lb’er as it looked huge. I netted it with some difficulty from 3 meters above with my Busted Net and eventually, it pulled the scales down to 6.34kg which was Brad’s pb Snapper. What a great day. 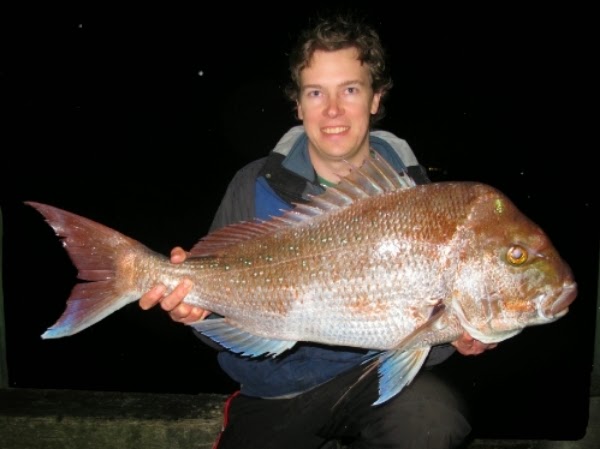 The next weekend the weather forecast wasn’t the best so I packed the tarp for shelter and the camp bed for an overnight stay on the rocks. 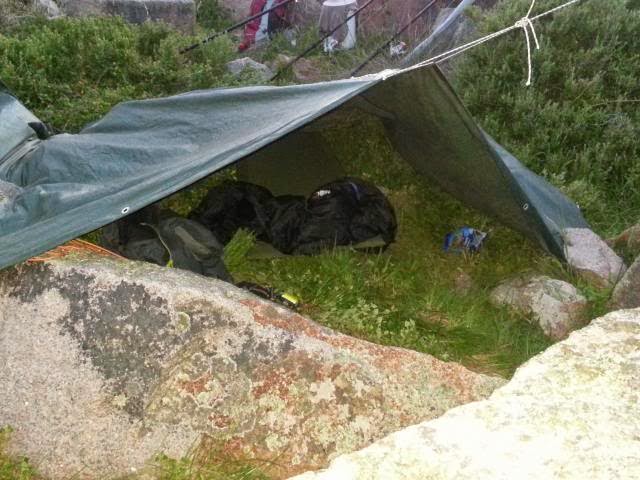 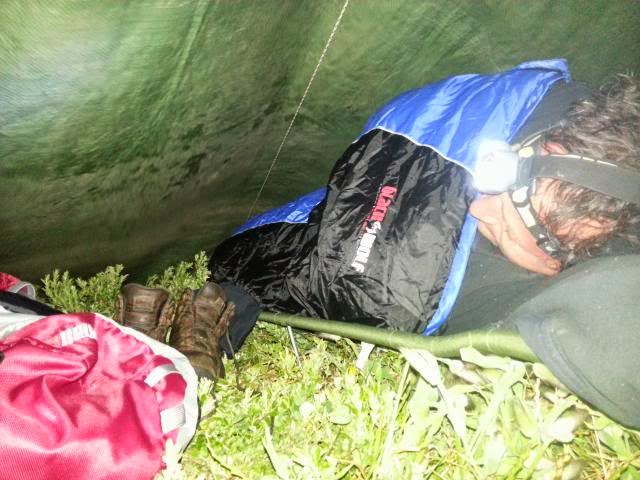 All I managed for the weekend was a small Snapper before the nasty weather set in and I made the hike back to the car. 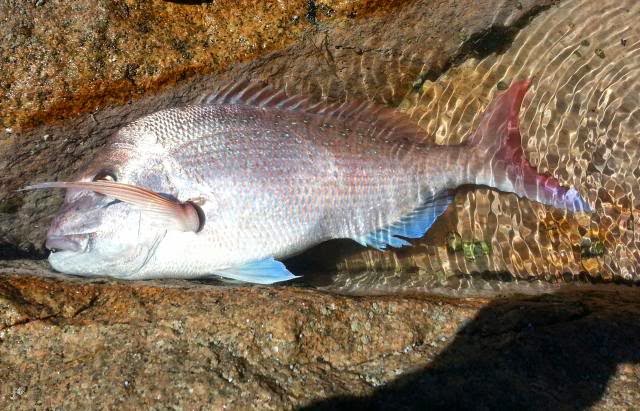 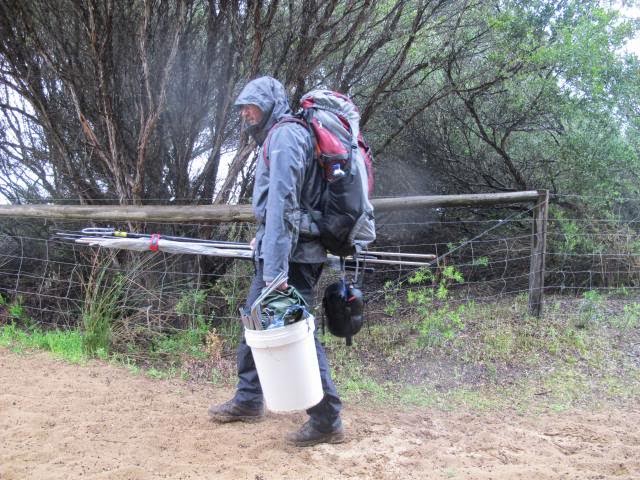 With all the Snapper reports from Portland during the week, I decided to head back down and have another crack, hoping to land a big Snapper on a 4kg line. When I got there Friday night, it seemed the hot bite had slowed down with only one fish caught in the morning.

In the meantime, I spun up a couple of Couta for bait on my Barrett 20 lures. 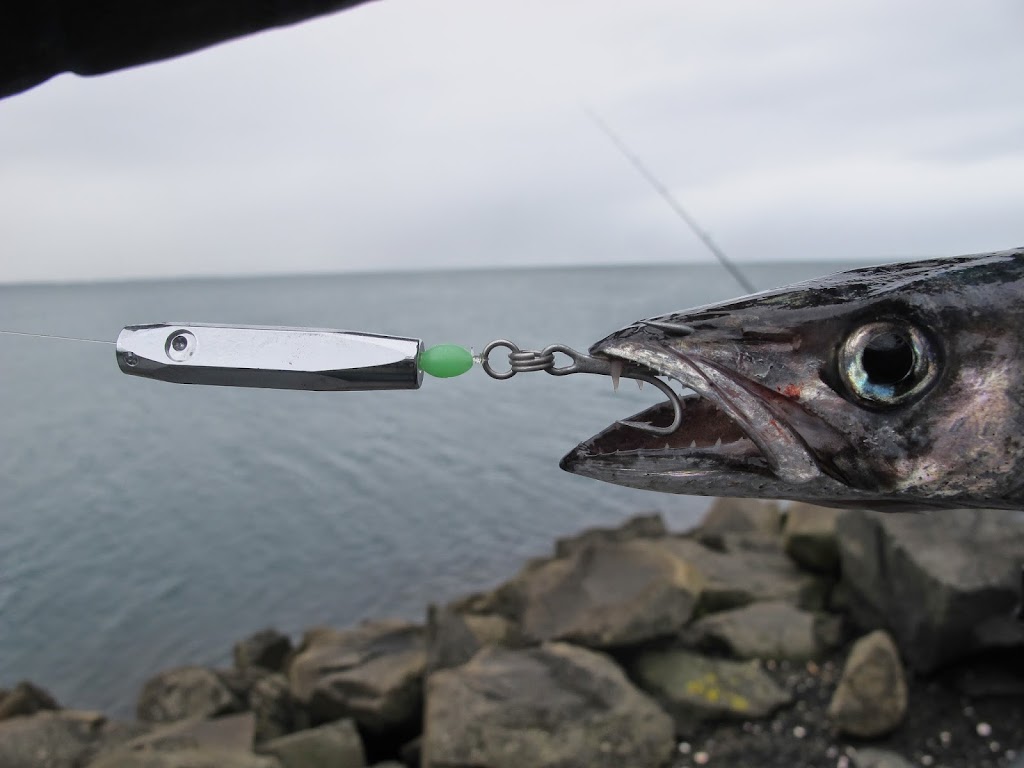 Fishing was tough with side wind and lack of fish. The only thing I caught by lunchtime Saturday was a Squid that hooked itself on my 2 hook rigged Pilchard. The Squid went straight back out and about 2 hours later the rod finally buckled over with the telltale signs of a Snapper. 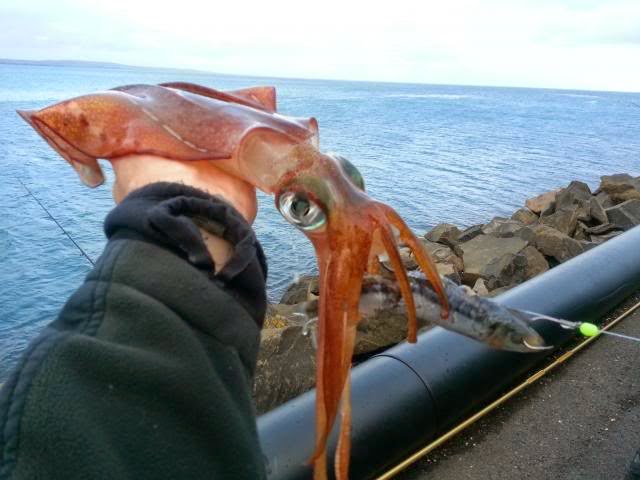 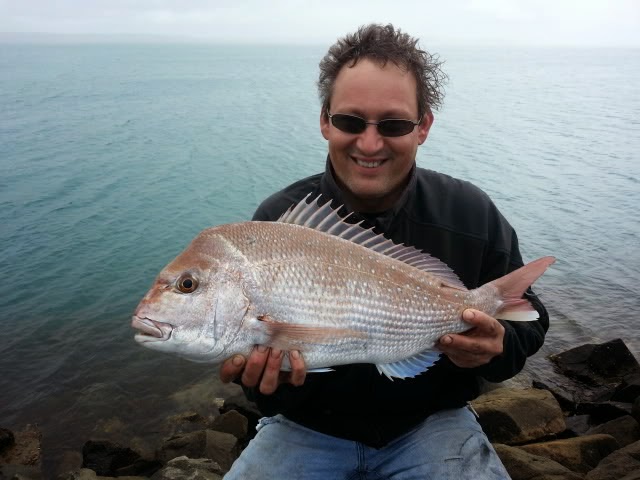 The next weekend once again provided a mixed bag of weather with 30knot winds, rain and sunshine all rolled into one. As I often do, I ventured out catching a couple of Squid before making the track to the rocks.
The nights fishing was great with a small Snapper of about 2kg which I released and then another nice Snapper in the morning of 4.92kg which I kept. 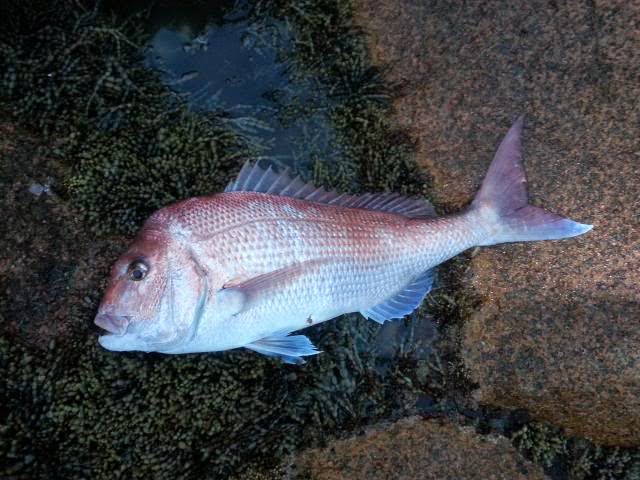 The next day I hiked back in with all the gear to stay two nights on the rocks and I was planning on fishing a 4kg line for an ANSA record.
Another Snapper followed which I released and I set up camp for the night.

After losing a quality fish on the 4kg gear trying to land it I spat the dummy for a while. Somehow the sinker wrapped around the gaff head after the first shot bounced off and it was all over. I estimated the fish to be around 6-8kg but will never know.
I did manage to release another smaller fish. 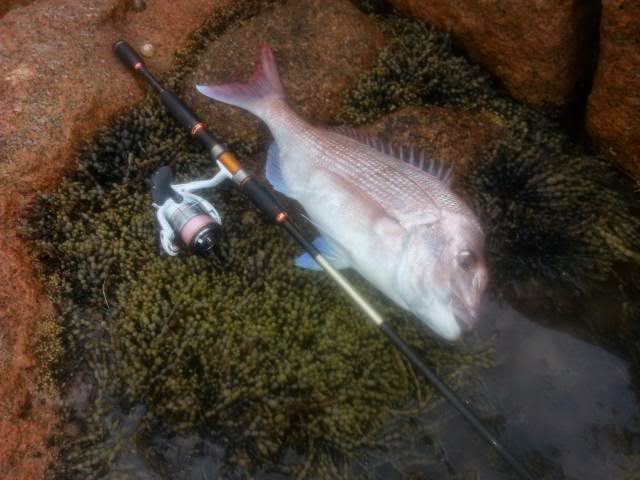 By the end of November, I went on another overnight trip, hoping for a big Snapper. The night was very slow with just one small Snapper and plenty of rays. In the morning the showers rolled in with breaks of sunshine and by about 8 am the rod buckled over and when I picked it up I got the telltale head shakes of a good Snapper. It was a rather good fight on my new Penn Prevail 11ft rod and Stradic 8000 which I had spooled with 10kg Platypus Low Stretch mono. When the fish came up, I was a bit nervous recalling what happened two weeks ago when I fished 4kg and the sinker wrapped around the gaff, but this time it was all good and a 6.4kg fish hit the rocks which was my best one for 2013. 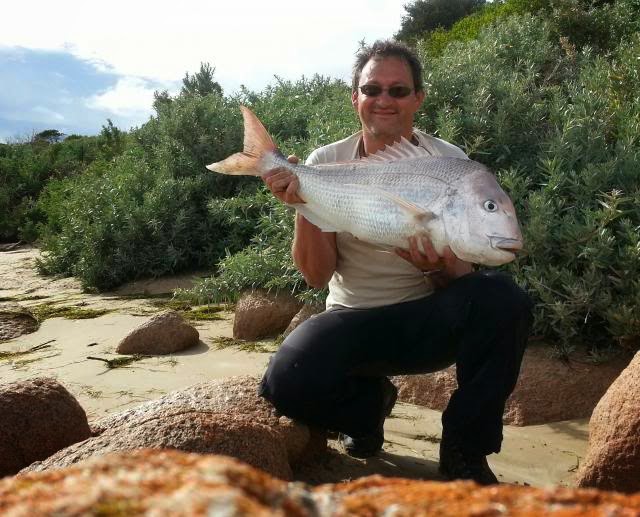 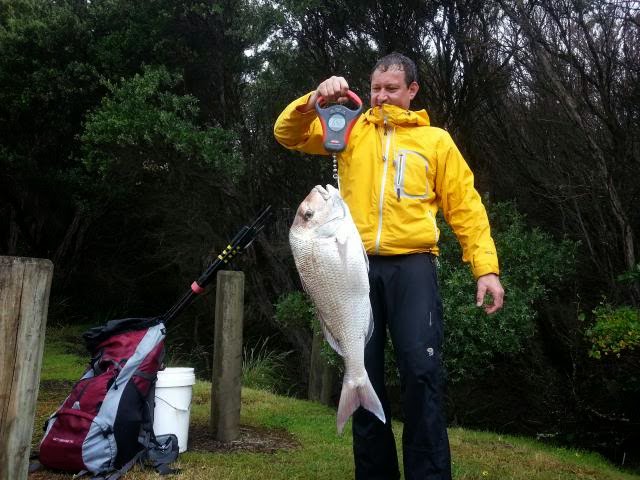 During the 2013 season, I used my tried and proven Ducks Nuts to make sliding rigs. The Ducks Nuts helped me catch some memorable Snapper in the past, including this 8.45kg fish a few years ago. 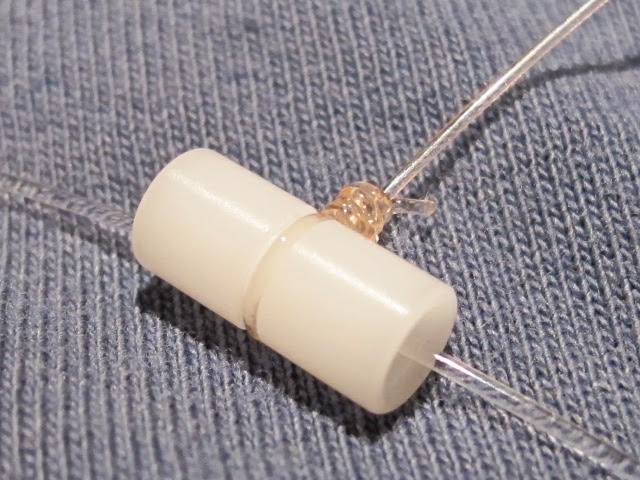 I also tried the Busted Pulley Beads for distance casting with good results and found during the day the extra distance helped to get over a drop off into deeper water where I had more hookups. 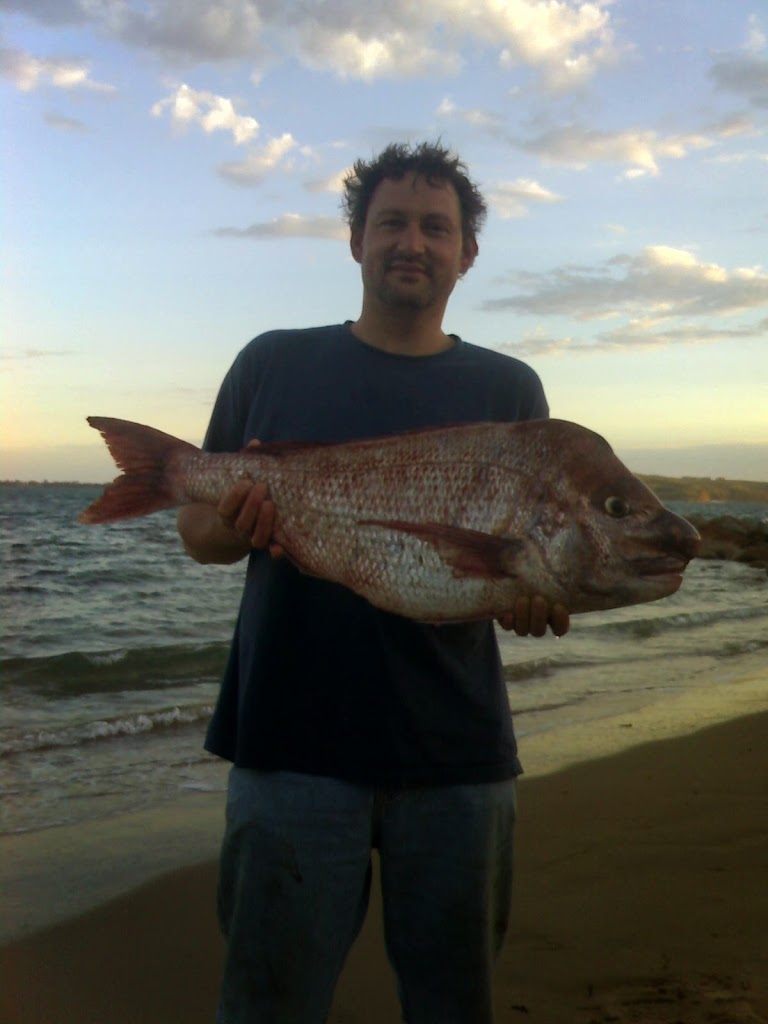 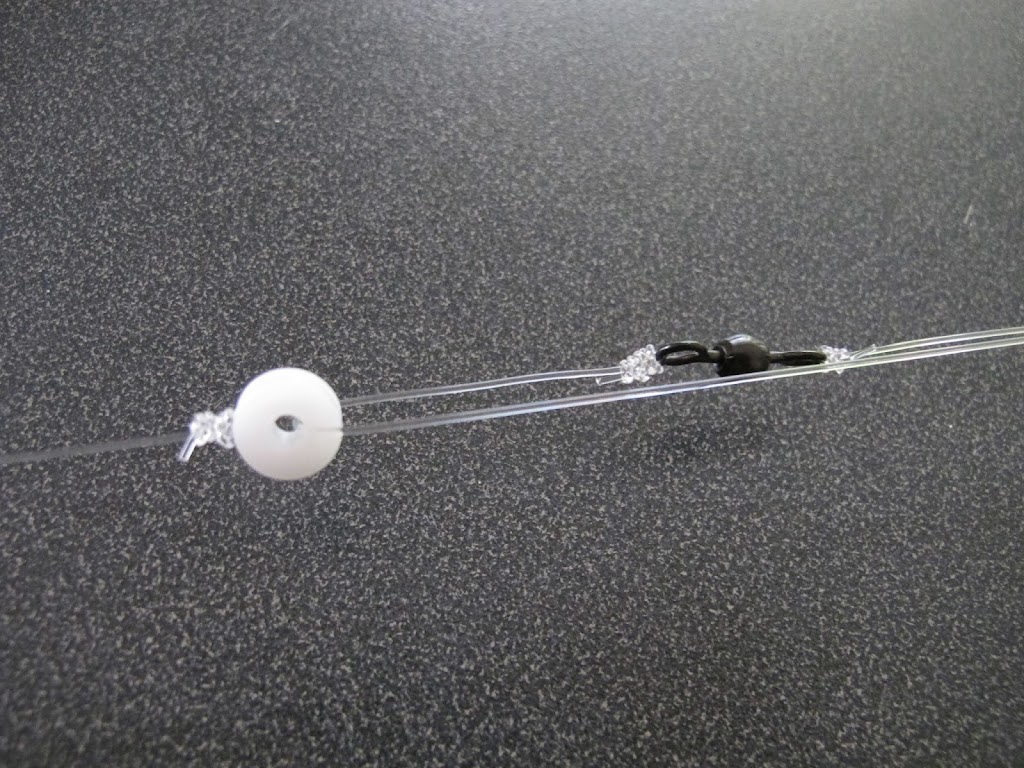 Here’s a short video on how they work: