The old wife’s tale that braid will ping as soon as it touches something under load is simply not true !!

Many anglers still believe that as soon as braided line will touch the rocks or reef when fishing heavy drag, it’s all over. But that’s certainly not the case with all braids. I haven’t compared all braids against each other but i can say with confidence that Tasline Elite is a standout when it comes to abrasion resistance. I get quite a few emails and messages from surprised anglers, who can’t believe their line didn’t pop after what they had put it through.

A recent case in point is this Blue Grouper from Chris Dixon. Anyone who has hooked one of these things of this size rates them as a tougher opponent when it comes to short-run power that even big Kingfish. Chris took some photos of the Tasline Elite he was using after the battle and here is the story in his own words and a few pics: 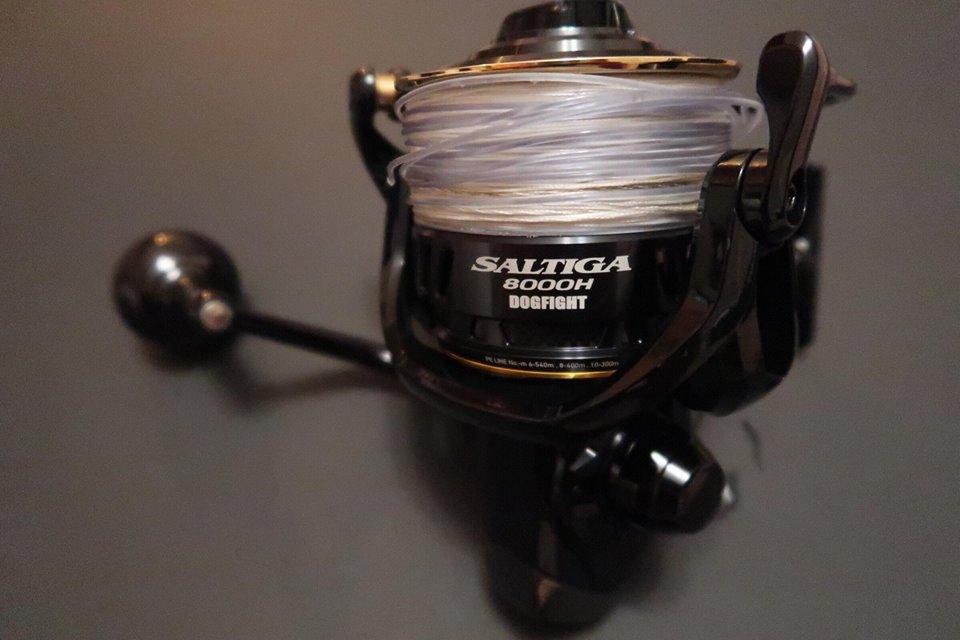 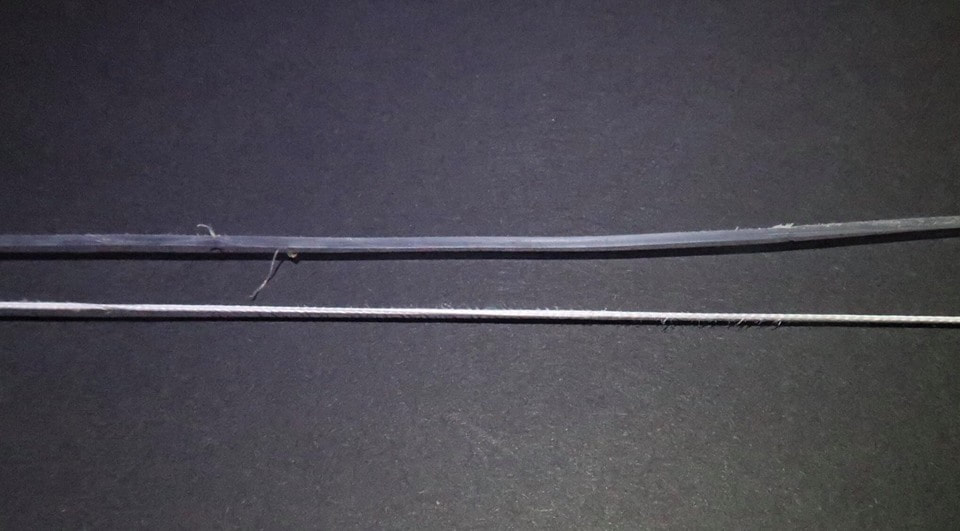 Chasing a big blue groper off the rocks has been a goal for me for a long time, I’ve swum with big ones diving and hooked or spotted lots while fishing but stopping a monster off the rocks on rod and reel has always been the ultimate goal. Blue groper is without a doubt the hardest pulling fish we have ever hooked over short distances, nothing comes close to the brute power they have and the determination they possess to cut your line off on anything sharp they can find. A 10kg fish around rough ground can make a mess of 80lb gear if you don’t stop them quickly so stopping a 20kg+ one is no easy feat.

This is the story of the day I finally landed a true brute of a Western Blue Groper off the rocks.

The day started at 2:30 am with the alarm going off and I’ve rolled out of bed after pressing snooze a few times, just after 3 am we were on the road. Aron, my Girlfriend Chelsea and myself were not looking forward to what we were about to do. The plan was to park our car as far as we could get it then kayak to a beach before walking to explore a new section of the coast. The only problem was we one had one kayak and that could only fit 2 people and out 50kg of gear for the day. So that meant Aron and Chelsea on the kayak and my option was to chuck on the wetsuit and swim behind the kayak. Just after 4 am we left the kayak spot and paddled/swam for an hour through the dark to our location. At first light we arrived, I got changed and we set up for the hike. We walked across a valley and around a mountain before coming out on the coast we had looked at on Google earth and planned on fishing.

It was nothing like we expected and a fair bit rougher than the day had been forecast but we found a good ledge anyway. A bit shallow for our other targets so we decided to have a go for Groper. Chelsea has been on a few adventures for no fish so getting her onto something was a bit of a priority. The first cast for Aron and he hooks a little groper about 10kg and we land that before releasing it. Next up I’ve cast out and hooked a decent fish and gave the rod to Chelsea, the fish took off and reefed her on the ledge we were standing on that was littered with bommies on the bottom and barnacles everywhere. I’ve grabbed the rod off her, cranked the drag up and surfaced this fish. Leadered it up and a couple of quick photos and off it went again.

A couple more casts and it was fairly quiet and I was thinking we had spooked them. Re baited the hook and cast between 2 big bommies that were maybe 20-30m from where we stood, the surge was insane and it was very hard to feel anything even with an 8 oz sinker it was still rolling along the bottom, a quick bob to keep the bait moving and up off the bottom and the line pulled tight before slowly moving away, it felt like a fish but could also be the surge, one big thump let me know this was a fish and I’ve struck. Line started screaming off and I’ve tried to pass the reel to Chelsea, a couple of seconds later this fish still hadn’t stopped on very heavy drag and it had found reef. I took the rod back and backed the drag off, this fish then pulled another 30m of the line through the reef and I’ve watched my 100lb Tasline grating over a rock that would be exposed between waves and the fish had obviously gone under it. Far out what a mess! The next few minutes was slowly and gently back and forth trying to drag the line back through the sharp barnacles between the fish taking more line and finally, the fish came free! With every bit of line, I gained more and more damaged braid that would come back onto the reel. The fish then took off again to the left and straight under what we were standing on and tangled me up once again in more sharp rocks. Finally, it came free and between all the whitewash I got a glimpse of a big blue fish with white fins (the white fins are typical of only large Groper).

After the flash of colour, it was back down and under yet another rock dragging the leader and braid through everything it could get close to. I’ve bumped my bail arm while trying to keep my line tight but not under any pressure so it couldn’t get cut off and given myself a mini heart attack while I was at it, bail arm now closed again and the fish finally swam into the clear it rose to the surface and we got the first proper look at it. From 6-7m up it looked like a very good fish easily 18kg. It’s obviously seen us above it and decided it didn’t like the look of us and off it went again dragging more line back through more sharp rocks before coming free and back to the surface once again. Timing the waves Aron got a good gaff shot in and he has gone to lift it before asking “is it stuck” to which I replied, “nope that’s just the fish”.

He tried again to lift it and it was to heavy to do solo on a wet weed-covered ledge so team effort to lift it straight up nearly the length of our 21ft Busted Ultimate Gaff. Over the edge came a true brute of a fish!! Well over my 20kg goal and what a crazy fight it was.

I felt bad for not being able to get Chelsea her fish once again but relieved to have achieved my goal at the same time. I stood admiring this fish and was in awe of how the gear held up to what I had just put it through, my 100lb Tasline was shredded but still holding up, the 200lb leader had abrasion all along with it and even had sections where curls of mono had been cut off the side of it. It was very lucky to have held up but also I do not think many other lines could have survived past the initial first run into the reef.

We took some photos and filleted the fish ready to pack the backpacks. I was exhausted but over the moon. The hike back to the kayak was exhausting but so worth it as well. We took a rest after the walk and I got back into my wetsuit and chucked on my fins. Just over an hour later, we got back to the car and we were able to call it a day. One crazy adventure that paid off in the end to a place that likely hasn’t been fished before and It’s likely we won’t return to again.

A quick rundown on the gear that caught it for the people that are interested as well. Daiwa Dogfight 8000H reel, Maven Coast 10ft 37-45kg rod, !00lb Tasline Elite solid braid, 200lb Varivas Shock Leader, 510lb Shogun 3 way crane swivel, 7/0 BKK Beastly Cat hook baited with half a rock crab. It was landed with a Busted Fishing Ultimate Custom Gaff with 3 sections and the small gape hook with an adapter to fit the larger thread.

Couldn’t have landed a fish like this without the quality gear and support we get from Busted Fishing.

Now to find a new goal to set out and achieve!! 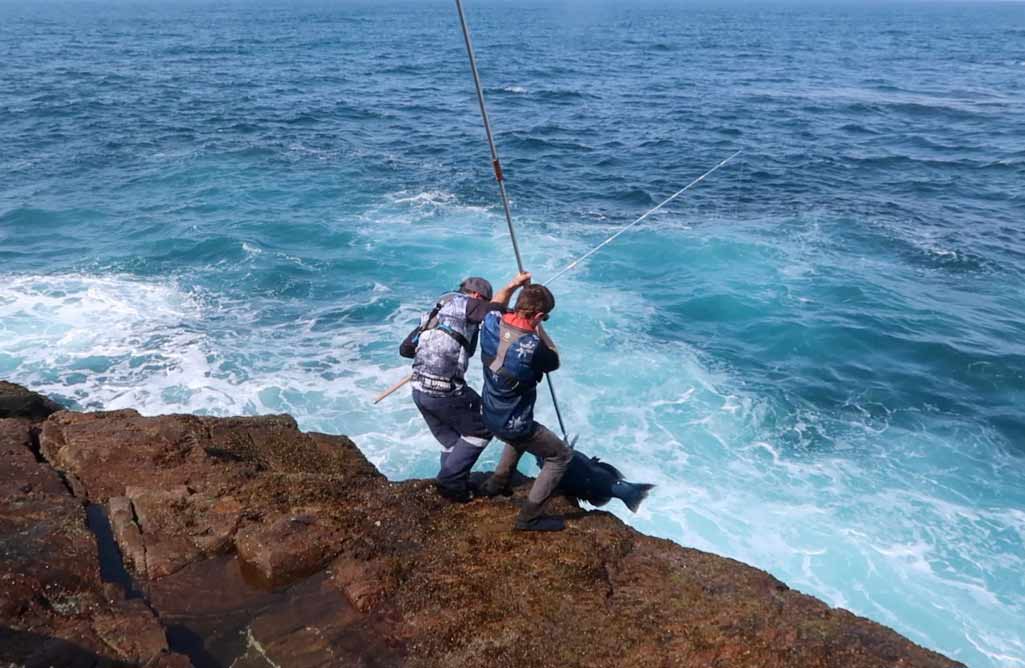 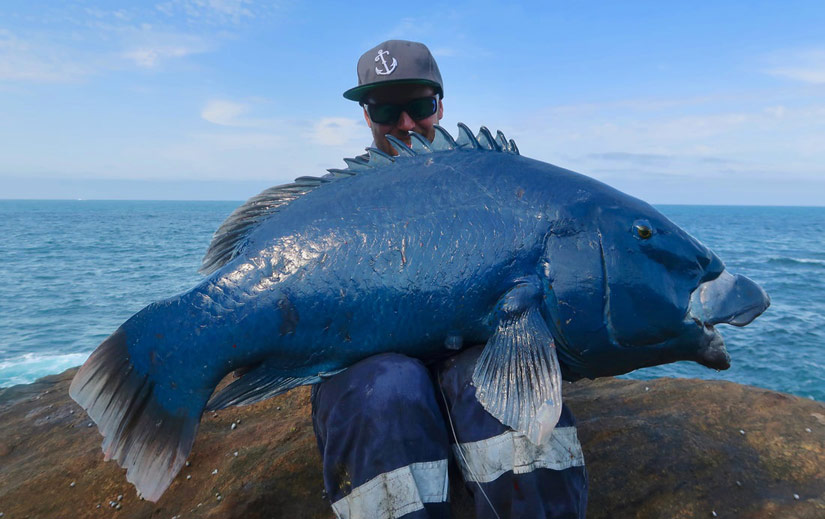 For more of the Dixon Brothers fishing adventures CLICK HERE